Posted on April 30, 2013 | Comments Off on Authoring project

Comments Off on Authoring project

Douglas Rushkoff’s last four commands are social, fact, openness, and program or be programed. The seventh command, social, claims that without a computer you are left out of social networks and will have difficulty connecting with people and being social because social networks are becoming a main source of communication. The eight command is fact and it claims that true facts spread around the internet more than false ones. When something is posted on the internet it is seen by so many people that it will be made clear if it is true or false faster than it would be if it was told to you by another person. The ninth command is openness, files and documents can be shared on the internet and that sharing is different from stealing. People without computers don’t know the difference between sharing and stealing something on the internet. The tenth and final command is program or be programmed. This command says that those who don’t have or use computers are controlled by people with computers because they are influenced by people who use the internet rather than contributing and being apart of digital technology and the internet.

Comments Off on Last Commands

When searching locative art in Wikipedia you get a page with a lot of information on it, but no way of knowing if any of it is misinformation as mentioned in the document Evaluating Information Found on the Internet, “it isn’t deliberate, it’s just wrong or mistaken.” Wikipedia can be used as a start for gathering information and search ideas, but nothing on wikipedia is credible and would need to be found on a credible site. Leonardo Electronic Almanac gave me a list of articles that were credible and useful, but it only gave me a few pages of articles. WorldCat was the most useful search engine because of the options that it gave me to narrow down my search results and all the results were credible. Both WorldCat and Leonardo Electronic Almanac give you information about the author to make the articles more credible. When researching on the web I must use search engines or databases like WorldCat and Leonardo Electronic Almanac if I want the information I find to be credible and correct. If I am starting to research a topic that I’m not familiar with I can use Wikipedia to get me started with broad information that I can search for in databases with credible articles.

Comments Off on Researching

Technology free for a day

Posted on April 9, 2013 | Comments Off on Technology free for a day

I had to wait until monday to start my day without technology because I was traveling to Los Angeles, CA over the weekend and it would have been too difficult to travel without technology. I had class on monday and homework to do so I couldn’t go the entire day without using a computer, but there were only a few occasions when I needed to use a computer. Other than that, not using technology for the rest of my day wasn’t too bad. I found myself wanting to listen to music because on a normal day I always like to have music playing while I do something. I didn’t have a problem not using social networks because I don’t use them very often when I can access them. Although I did struggle with knowing what my friends were up to because without my phone I couldn’t talk to them. The relationships I have with people are completely dependent on my cell phone, without my phone I can’t talk to my friends. When I get bored I like to go on the internet, so without the internet I had to find another way to entertain myself. I tried to spend the spare time I had accumulated with studying and doing homework, but I still wanted to listen to music while I did my school work. Although I was more productive with the time I spent doing my school work without the internet and my friends distracting me.

Comments Off on Technology free for a day

Posted on April 2, 2013 | Comments Off on Social Networks

Social media websites are changing the way people interact in our society. Now some one can get to know you and even meet you on a social media website. People now can get to know each other by what they share online. On a social network site a person can pick and choose what that want to share with people, but it is difficult to get to know a person if they don’t share or even try to hide things about them when in person they can’t hide who they are. These websites allow people to appear how they want, when in reality they might be different. “The trust we create on social networks fuels the empathetic response we have to one another, even if we don’t know each other that well” (Zandt 153). We trust that the relationship that has been created on a social network is real and and wouldn’t be different in person, but if we ever meet the person that we know online we find out what they didn’t share on the social network. “We can all hide behind the giant curtain of technology” (Zandt 170). You can create a different identity online, changing small characteristics about yourself or even creating a completely different identity and pretending to be someone you’re not. This can make it difficult to judge the people we meet online and if you get the chance to meet the person that you know online, they might not be who you originally thought they were.

Comments Off on Social Networks

Posted on February 21, 2013 | Comments Off on Authoring Activity

Here is the link to my video.

Comments Off on Authoring Activity

Remediation in the News

Posted on February 5, 2013 | Comments Off on Remediation in the News

In the article they define that “we call the representation of one medium in another “remediation,” and we will argue that remediation is a defining characteristic of the new digital media” (page 78).  With the news broadcast from ABC World News being 18 older than the Broadcast about Oprah, there must be some remediation of the old technology. You can see that both videos are similar, but the newer one has noticeable new technology that was used to create the broadcast. The ABC World News video is fairly simply, just videos with not a lot on the screen. But the Oprah video has several different things that are happening on the screen. At the bottom of the screen there are headlines that are constantly changing. Also, they have three different people that are in three different locations on the screen at the same time having a conversation with each other. The concept of remediation shows that they are using the same style of video to present the news, but it has been influenced by the new technology to deliver a very different news broadcast. It is also mentioned that “the viewer stands in the same relationship to the content as she would if she were confronting the original medium” (page 79). Both videos are presenting the news and the viewer is still being informed, the only difference is that the new technology has made it so the the viewer receives the information a little differently.

Comments Off on Remediation in the News 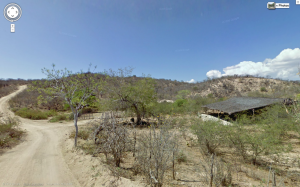 The picture that I have taken from google maps is of a dirt road in La Trinidad, Mexico. Walter Benjamin raises the question that because photography is a mechanical reproduction is it considered art? Walter Benjamin claims that even the best reproductions of art are lacking “its presence in time and space, its unique existence at the place where it happens to be” (page 3). If someone wanted too they could go to google maps and reproduce the exact same picture that I have taken or they could even go to Mexico and take a similar picture. Then he brings up, “whether the very invention of photography had not transformed the entire nature of art” (page 6) and ”The concept of aura which was proposed above with reference to historical objects may usefully be illustrated with reference to the aura of natural ones. We define the aura of the latter as the unique phenomenon of a distance, however close it may be” (page 3). He claims that because a picture can be reproduced that it loses it aura. The fact that it can be reproduced means that it is not unique, but that does not mean that a picture is not art. The nature of my picture presents aura and illustrates details that are often over looked.

Comments Off on La Trinidad