How to Rob a Bank by Alan Bigelow was actually a really fascinating story about life. There is definitely a sense of coherent-ness to the story world as most of it is written in a digital diary by a mother to her baby daughter. The part that kept me the most engaged was how in between really personal and specific diary entries to her daughter, it would show what she googled that day to fix the problem she was having with her baby or her husband. 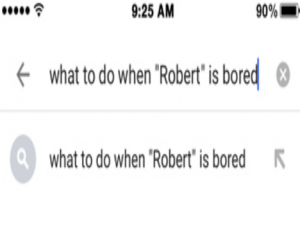 It would also show that she used a meditation app or watch a cartoon when she was feeling particularly overwhelmed. The sequencing was pretty linear because you could tell the story was moving in order of date/time, but it was also a little unimportant to the story. If anything, I would stay this story is more real than most content because it gives insight into what humans actually do all day in our technology driven world. Not only do we get to see the drama of the story unfold but we also get to experience some of life’s more mundane activities with the main character.

The second story that really stood out to me was CityFish by J.R. Carpenter. Also, a type of diary, the story is told from the perspective of a young girl from Nova Scotia who visits family in New York every once in a while. This story is a lot less coherent than the first because part of it tells us the experiences from the girl’s perspective, part of it is quotes she chooses to include for various reasons, and part of it is pictures that either have to do with the diary entries or other random things. 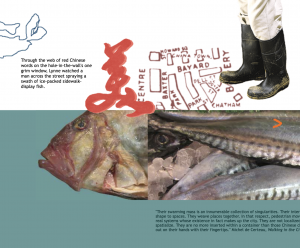 Sometimes it was a little hard to follow, but what kept me the most interested was that I could really relate to the girl’s thought process. While the story itself could be read in a linear way, our life and thoughts don’t always follow a linear pattern. They’re random and intrusive and I thought this story did an excellent job of portraying that.