I chose to watch the short video The Ordeal of Scentless. When I first started watching the video, I immediately felt a connection to it. In my own life, I’ve been having a lot of troubles and anxiety lately and have been feeling very overwhelmed by life. I could relate to how the author feels in nature vs being surrounded by strangers. One of the very first examples I saw of the author using symbol to convey an emotion was when they used an expanding white screen to make the statement “It is so vast it makes me feel dizzy” feel very powerful to the audience. When describing the Grand Canyon, the author uses an overly exposed image of the canyon, accompanied by the sentence “I can barely keep my eyes open.” 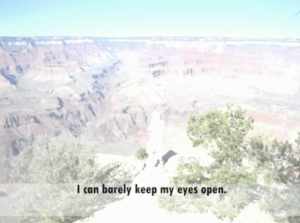 This was another great use of symbolism because I could infer that not only was it was bright, hot, and sunny there, but the author felt a sense of being overwhelmed by how peaceful and vast the Grand Canyon really is.

At this point the story got kind of confusing to me. I wasn’t really sure what story the author was telling and how the different elements were connecting but I did pick up on a few signs and symbols that helped me piece it together as much as I could. Throughout the entire story the author uses a white silhouette to show people’s bodies in the streets. 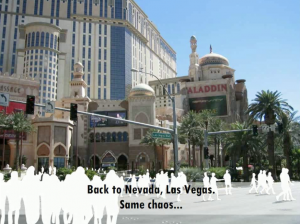 I think the author is eluding to the fact that they are strangers and are just nameless, faceless people to them. I could tell that the author might be feeling alone or like the world was chaotic because of how he chose to represent people like this. Eventually, the author meets a girl and little colorful bubbles start appearing within their white silhouettes. I think these thoughts represent emotions that are being developed between the two of them. After they meet, these bubbles show up in other ways. You can now see them being a part of other experiences they have and it seems like he might have gained a more positive outlook. Honestly, by this point in the story I was feeling pretty confused about the way the story was unfolding but I think I got a really good sense of the tone and emotions behind the words.