Some of the most lasting messages I received growing up were from coaches.

My personal favorite: “Whether you say you can or say you can’t, you’re absolutely right.” Thanks for that one, Coach Oz.

Sports is metaphor for life, after all, and because of that, media platforms as high and mighty as the Super Bowl draw liberally from across the social spectrum. Translation: it is an event to be experienced if participation in any Monday morning water cooler (or Starbucks) discussions are desired. And let’s face it, they are.

All of which makes what happens on SBS more important than it has any right to be.

So what happened on Sunday?

I hate to say I told you so – oh, who am I kidding? – but I was pretty much preaching to those who asked – and a few who didn’t – that Denver was going to win because of superior leadership, character, and experience – not to mention a stone-cold defense forged from the fires of failure in Met Life Stadium in Super Bowl XLVIII. Peyton Manning had a Hollywood scripted finish to write that is the stuff of Rocky, Remember the Titans, Invincible, Friday Night Lights, and Rudy, rolled into one.

And so I expected he would rise up. I expected he would do and say the right things to represent himself, his family, his profession and the league in the right way – on the field and off. He did that and more. A certain life insurance jingle comes to mind. (You know the melody.) “Pey-ton, you’re a clas-sy guy.”

What I didn’t anticipate was the scene that played out in Carolina’s backfield on the field and at the presser afterwards. Cam Newton threw himself a prime time pity party. It started in the third quarter and continues as of this writing. If poor losing is a credential, he has officially qualified himself to be Donald Trump’s post-Iowa running mate.

I wrote a blog at the start of the football season about another quarterback prima, one Tom Brady. The crux of the scribble would best be filed and found under the heading of “learning from bad examples.”

The file has a second entry.

Or the lack thereof. 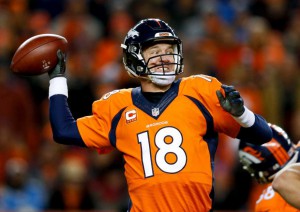