One of the biggest game players, or aspects in electronic literature is the power of hyperlinks. The idea of “non-trivial interaction”, thought of or introduced by Aarseth describes the difference between choice-making and just playing “next” or flipping a page. Essentially, the innovation of hyperlinks heavily influenced e-literature. Hypertexts and links allow users to find information in a non-linear fashion- completely changing the way people not only find what they’re looking for, but creates innovative and creative ways of thinking in general.

When it comes to digital art, hypertext and hyperlinks allow the user to see different perspectives of various things or characters in a game or story at once. This also means that nonlinear story-lines came to life on the digital computers, creating new forms of art that play a big role in the various types of games, movies, stories, and other forms of entertainment and information we have access to.

The biggest thing about use of hyperlinks in electronic literature that should be taken note of, is the other important opportunities it gives its users: 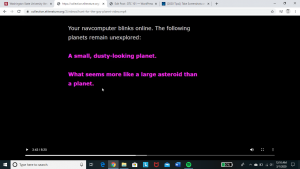 In this example, the user is able to read a story line and make decisions by clicking on hyperlinks to lead the user to their next step in the scenario, where they then get to choose again and eventually come to an end of the simulation. This is a good example of how hyperlinks can be used to progress digital tech. and expand the ways humans are able to make decisions through hyperfiction.’

Overall, hyperlinks have heavily expanded the uses of digital computers, and furthermore supported McLuhan’s idea of “the median is the message”, because we wouldn’t have access or the ability to create and use these new innovations of the digital world without the creation of digital computers.

Our network media culture is built upon by the ways the internet was made and continues to change as time goes on. With the easy access and ability for manipulation/copying that comes with digital media, it has become an issue of copyright and infringement issues for our developing world. The principles of Remediation brought forth by Bolter and Grusin talk about the ways in which new media borrows and uses techniques of older media to become innovative. Because development of new media requires the old, there are many similarities or copying that can occur between different medias. In other words, one media cannot exist without the older. This creates some challenges and opportunities for developing and growing types of media.

One of the issues that arise is finding a balance between using easy-access media to build upon and create and using too much original content where the creativity of new artists is lost. In Laurence Lessig’s book “Free Culture”, he discusses exactly this issue. Since media that exists is so easy to access, change and spread, it is only fair for users to do so. But at the same time, creativity and Originality is lost when too much of others’ people work is taken. This also creates the issue of copyright problems as well as artists not getting credit, money, or recognition for things they spent creating.

The tie between Bolter and Grusin’s ideas of remediation and the current issue of the challenges/opportunities of artists’ rights is that building upon others’ creations allows more opportunities for innovation and discoveries- whether that be through music, photography and video, or any other digital media. Simultaneously, the use of others work disturbs the process of art and creativity because people can steal others’ ideas- leading to copyright issues. The recognition of remediation and how it plays a role in issues we are facing today is an important aspect to remember when it comes to our developing world and the importance of finding a balance between being original and being innovative.

Media- the Importance of Originality

Although media has continued to progress throughout the last few centuries, one of the biggest contributors to understanding and controlling the use and production of media comes from Walter Benjamin, who saw both the positive effects and possible negative outcomes of this progression- dating all the way back to the early 1900’s.

In his essay, “The Work of Art in the age of Mechanical Reproduction”, Benjamin examined the benefits and downsides to the various ways media was progressing in that time. In his time era, many technological advances were being made- such as stamping, woodcuts, lithography, and eventually film and photography made an appearance too. Benjamin saw these advances as a gate to opportunity and progress, but he was able to take note of how forms of media changed when they were copied. His big idea was heavily based on “aura”; the idea that the time, place, and history of a work divorced art from its ritual value (OER 2.0).

The reason Benjamin’s work is so important is because his ideas and views of media continue to influence our day to day world. Being able to recognize and understand the value of originality in a world where imitations and copies of media are always being used by various people, it can be hard to set a true and meaningful value on any piece of work (digital or not). Although a “network aura” exists- a new type of aura that re-enhances media through amplification of attention to replicated images- there is a major loss of originality and sentimental value to people’s work. Therefore, it becomes so much more significantly important to be use our own original ideas and methods to create art, and all other types of media, regardless of what their message might be.

Below is an image of Picasso’s original work compared to a copied version of his original work- which do you think is better and why? It almost seems like because there are so many copies of one original form of art, it makes the original that much more valuable, because of Benjamin’s concepts of aura, along with the network aura that exists.

Painted Art Reproductions vs. Giclee Prints | Which is better?

Welcome to CMDC WordPress. This is your first post. Edit or delete it, then start blogging!