Since late April I have been working on a grant submission that would provide funding for the ELL Team to use Rhizome.org’s Webrecorder to preserve electronic literature works produced with Flash and Shockwave from 1996-2016 that are archived in the 12 journals, anthologies, and showcases held in the ELO Repository.  WSUV gave me seed funding so that during the month of May, the ELL Team could inventory the 12 publications to determine an exact list of works produced with Flash and Shockwave, figure out the level of complexity each entails, and conduct timed runs of the process. We identified 447 works in need of preserving, else they will all be inaccessible by the end of 2020 when Adobe stops supporting its Flash Player.

The grant is due on July 16, but a complete draft is now ready for refining. Because we are promising in the grant that we would also deliver video documentation of the process, we thought it a good idea to produce videos to accompany the grant narrative. Here is the first one, the introduction to the project, created by the ELL Team videographer, Moneca Roath. 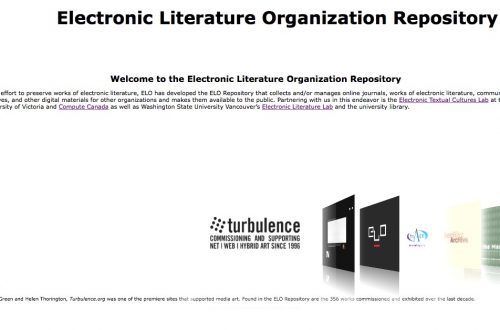