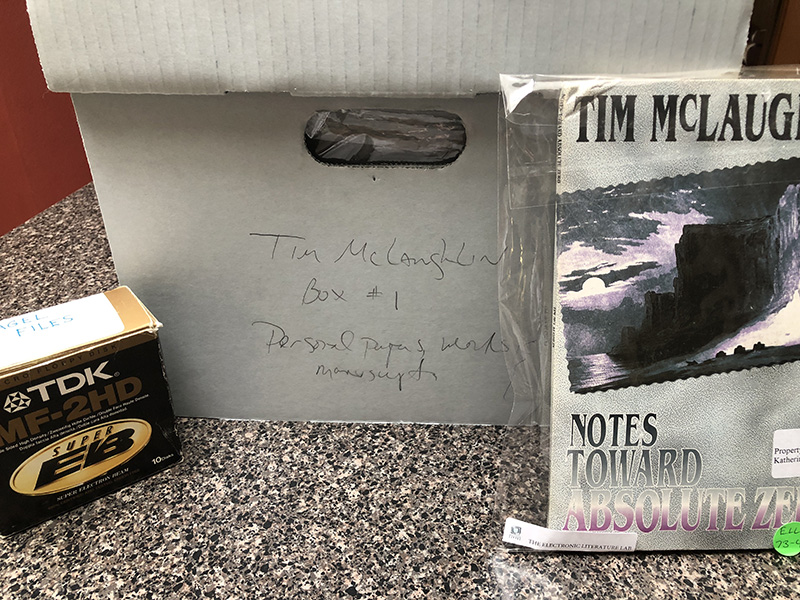 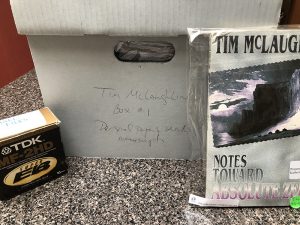 One of the most satisfying experiences working in my lab is organizing a collection of electronic literature. Recently, for example, in preparation for writing an essay about Tim McLaughlin’s Notes Toward Absolute Zero, I went through the box of papers and disks he donated last March to the Electronic Literature Organization’s archives, which are housed in the lab. He had already walked me through the manuscripts, box of floppy disks, and folios and jewel cases of e-lit works that comprise his personal collection while we were together for his Traversal at the University of Victoria Libraries. I had already spent days in the summer following that event inventorying the items for what has become The Tim McLaughlin Collection and placing them for safekeeping in archival boxes and folders. But it was only this winter that I finally had the chance to examine them all carefully and compare the drafts and manuscripts with one another, an experience that turned into a quest for answers not unlike the searches undertaken by the characters in his story. Like Lady Franklin’s, Jericho’s, and Winter’s, mine too was motivated by love.

You see, I love electronic literature. I love the drive authors have to experiment with words, with words in different mediums, with words with different modalities, with words on a screen of a computing device. And I particularly love it when I can trace the evolution of a work from paper to computer back to paper again, for it gives me a window into the thinking behind the development of the form–or forms in McLaughlin’s case. And then of course I love writing about electronic literature. Frankly, I could spend every day of my life in my lab with my students studying and writing about e-lit and never tire of the experience. In a sense, I see this kind of work as a search for meaning and understanding about literary form––something I have essentially dedicated my life to. 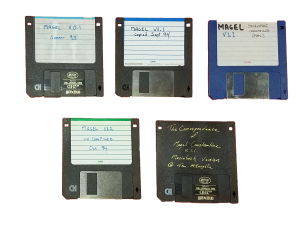 McLaughlin’s work was particularly challenging because it entailed so many different editions and versions. I spent a lot of time going from computer to computer in the lab trying to open the five Magel floppy disks [1]  until I finally realized it was the Performa 5215CD I took home with me loaded with a copy of Storyspace V 1.5  that finally would do the trick with those disks holding raw Storyspace files. Once opened, they provided a treasure trove of information about Notes Toward Absolute Zero, from when during its development he made the leap to adding the Frontispiece and Backispiece, to how he went about learning how to use Storyspace for creating the work.

It took me a while to organize the editions and versions, mainly because some of them were in development roughly at the same time. Several emails between McLaughlin and me passed before I had come up with a suitable starting place for the timeline. Mark Bernstein also helped with some dates and development issues that shed light on the work. In the end, I devised the best possible draft of the evolution of the work that I possibly can at this point and then laid out that argument in the essay. New information may change this structure in the future. One belief I subscribe to is that scholarship is not definitive. It is merely a place for others coming after us to use for layering new information. Over time a finer, more nuanced determination of ideas about a subject may emerge. So, take that as a caveat for what follows: my organizational structure of Tim McLaughlin’s many, many different manuscripts and removable disks held in the treasure chest that is called, The Tim McLaughlin Collection. 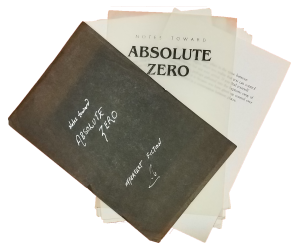 Editions and Versions of Notes Toward Absolute Zero

Note: All titles reflect the way in which the author named his work and files

1.02 “Magel test v. 1.02.” Summer 1993. Proof of concept, entitled “The Correspondence of Magel Constantine: A Philatelic Novella,” for the research project, “Hypertext Fiction and the Literary Artist,” by Tim McLaughlin, created with Robin Parmar, and Christopher Keep, a project that evolved into “The Electronic Labyrinth” and later the “ELAB;” presented to the Banff Centre for the Arts

1.1b “Magel 1.1.” Final version of “The Correspondence of Magel Constantine: A Philatelic Novella,” with disk hand-lettered by author in gold ink. December 1993- September 1994

3.1 Created with  Storyspace for Windows 3.1 and later

✭ Version 4: Notes Toward Absolute Zero, produced on CD-ROM for both Macintosh and Windows and published by Eastgate Systems, Inc. 1996

4.1 Created with Storyspace for both Macintosh and PCs

As I said: A quest that entails a labor of love.

[1] Notes Toward Absolute Zero was called during its development, The Correspondence of Magel Constantine. The box and all of the disks held in it were titled “Magel.” Magel is one of the characters in the story––the beloved uncle of Jericho for whom she desperately searched. 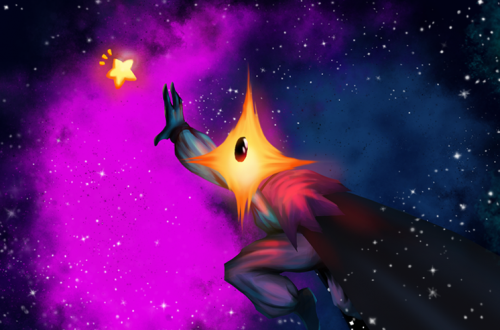