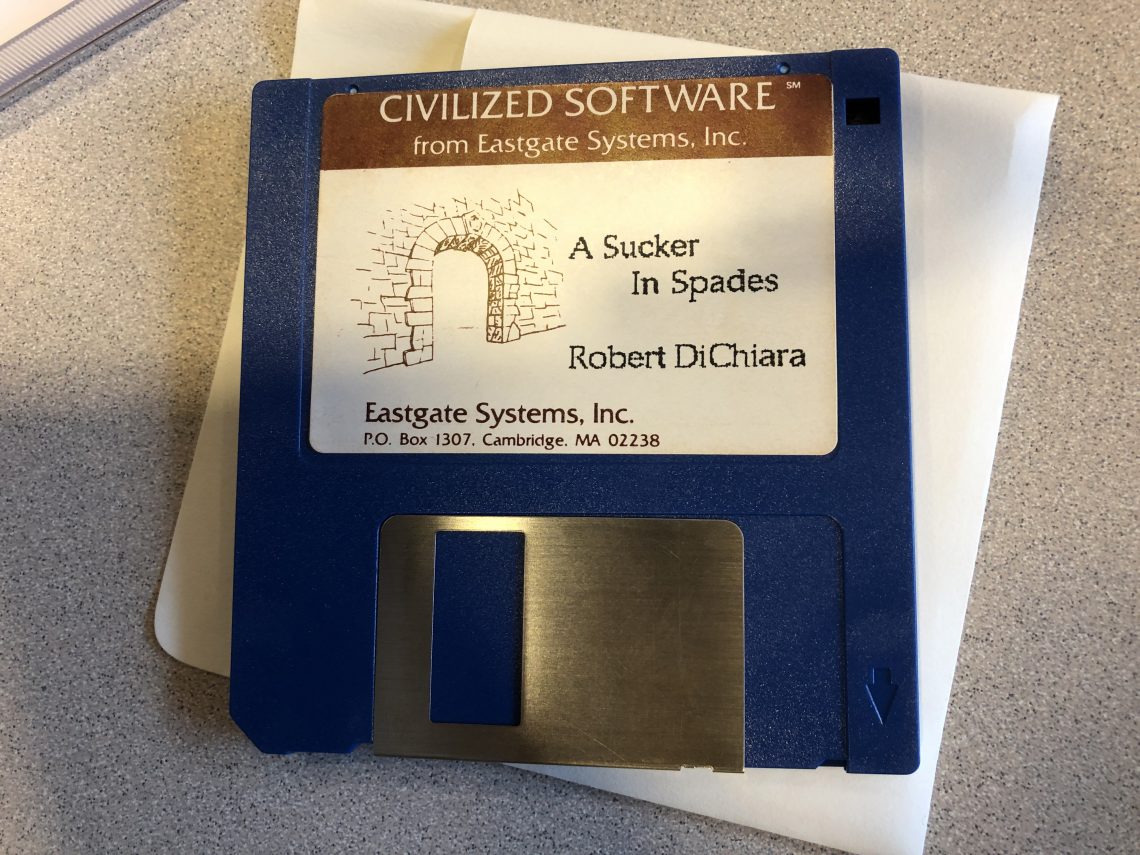 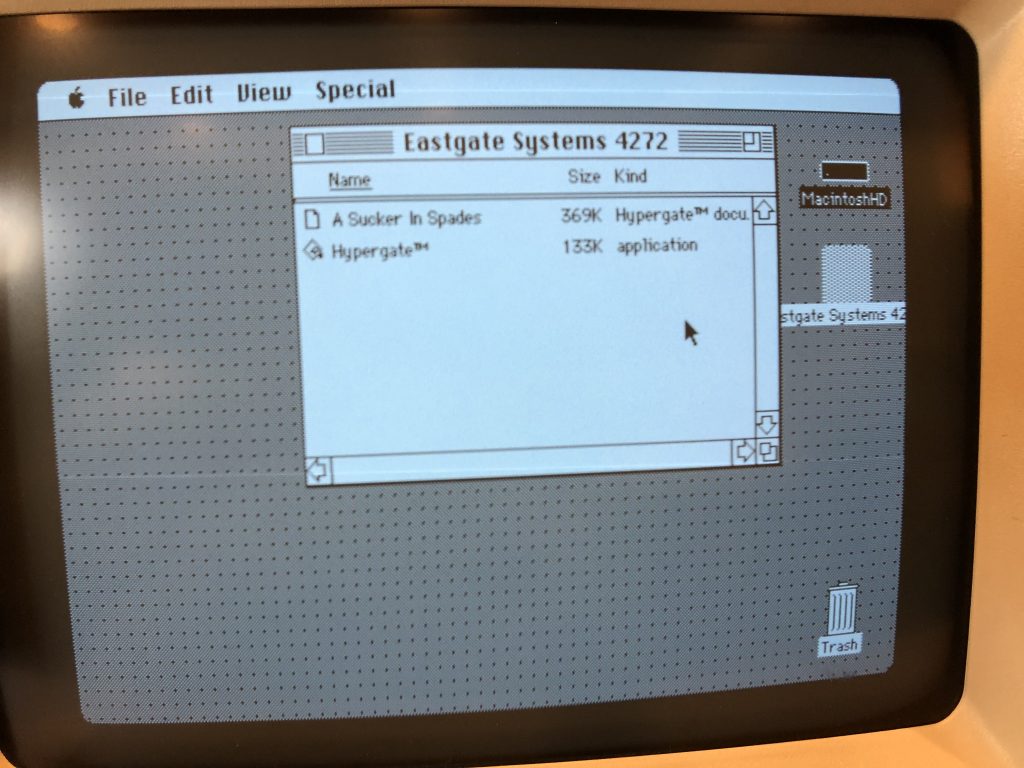 The question I get asked a lot is, Why do I care so much about early interactive media, particularly since they are generally relegated to the black and white (or green on green) environment of a computer monitor (and a small one, at that), are text-heavy, and whose images–-if they exist at all––are comprised of ASCII art, and mood, augmented by 8-bit sound (if there is any sound at all)? This is a valid question in light of contemporary interactive storytelling techniques that involve robustly immersive environments created with Virtual Reality, Augmented Reality, and 3D technologies.

It boils down to this: I am fascinated with the way ideas develop over time and contribute to approaches, techniques, and technologies used today. A case in point is the recent discovery Holly and I made: Robert DiChiara’s detective-adventure game, A Sucker in Spades.

Published by Eastgate Systems, Inc. in 1988, A Sucker in Spades is based on the author’s “choose your own adventure” story called “A Sucker in Spades” that was published along with several others in a collection called Hard Boiled. That book came out in 1985. These dates explain why the disk we have in the lab states that its text was copyrighted that year. It took another three to conceptualize and re-create the print-based story into one for the computer medium.

The date is telling because already by 1985 Douglas Adams and Steve Meretzky’s The Hitchhickers Guide to the Galaxy had been released for the Apple II and Commodore computers; a year later Thomas Disch’s Amnesia would be released by Electronic Arts (EA). [1] In other words, DiChiara’s work tapped into the Adventure Game craze at the beginning of the genre’s popularity. [2]

That A Sucker in Spades landed at Eastgate System, Inc. and was published by the company in 1988 makes sense when we consider that by that time EA had already lost money on Amnesia and never published a work by a prominent literary artist again. But Mark Bernstein’s company was different in that it specialized early on in interactive media with a literary focus and had developed, by 1988, its own literary platform, Hypergate. As I mentioned elsewhere, [3] Hypergate was programmed with FORTH, a language created in 1970 by Chuck Moore that was used in 1984 for the development of first Macintosh and also formed the basis for EA’s game, Starflight (1986). As the title screen (Fig. 2) also suggests––with the mention of Think Technologies––the work was also produced with Think C, a C programming language needed for MacOS programming. In 1988 Bernstein published his own work, The Election of 1912 (with Erin Sweeney) on the Hypergate platform and had begun working with science fiction writer Sarah Smith on the production of her own interactive narrative, King of Space, which was released in 1991. 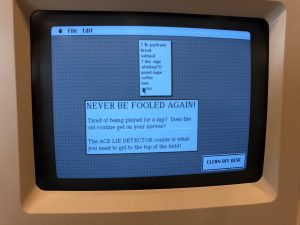 It is obvious to readers at the outset that DiChiara’s work constitutes an adventure. After booting up the work on the computer––in our case, my Macintosh SE, running system 6.0.3––we encountered the work’s title screen before being taken to an introductory screen that reads,

“Never Be Fooled Again!” Tired of being played for a sap? Does old routine get on your nerves? The ACE Lie Detector course is what you need to get to the top of the field!”

Also on this screen is a list of items one would purchase from the grocery store. Below on the bottom right hand side is the direction to “CLEAN OFF DESK.” Clicking on it takes readers to a form where they can describe themselves. Decisions made by readers affect the storyline. For example, if readers choose “female” as their gender, then they will not be able to accomplish some of the tasks required to move the story along. In effect, readers  are a detective who must solve a mystery, interacting with people and visiting various places along the way (Fig. 3), ultimately racking up points for the sophistication of their investigation. As they do, items are grayed out and sometimes replaced with new opportunities, making for a complex game environment.

A Sucker in Spades also involves managing assets. Readers can decide just how much “muscle,” “magnetism,” and “moxie” they need to overpower, overcome, and outwit the story’s antagonists. For example, when encountering the femme fatale Amanda, readers may decide to use their magnetism (Fig. 4) to get the answers they need and can adjust their percentages based on that decision. Making the wrong decision costs points and possibly readers’ ability to solve the mystery.

When reading the work, I found I could play through it for about 30 minutes. During that time I encountered about 10 different characters and visited about 10 different places, and I made five to seven major decisions about the case. One of the scores I earned, 15, put me in the category of a “near-sighted peeper.” (Fig.5)

In keeping with the genre of the hard-boiled detective novels of the 1930s, A Sucker in Spades maintains the language of The Maltese Falcon (Re: Sam Spade) and others where women are “dames” and men who fall for them, “saps,” where gumshoes have loyal secretaries, and where the police are determined to stop interlopers––like Private Eyes–– from interfering with their cases. A wicked sense of humor prevails in the work. It pokes fun, for example, at the genre’s sexism, drawing attention to changing roles of women in the late 20th Century. When as a “female” trying to gain a clue needed for solving the case, I received the message:

“Uh, oh, the secretary goofed. A dame shouldn’t have been assigned to this case; it’s too politically incorrect and potentially explosive. Reassign this case to a male colleague, please.” (Fig. 6)

No one is beyond scrutiny in A Sucker in Spades. The police, criminals, secretaries, femme fatales––even staid librarians––are fair game for a story that requires only 395K of space.

Like the two other works Eastgate Systems, Inc. produced with Hypergate, A Sucker in Spades was never migrated to Storyspace, the software and interactive-hypertext platform Bernstein went on to build his company’s reputation on; or to CD-ROM when that technology became available; or for the PC environment when the company began publishing works for the Windows operating system. A Sucker in Spades, like Bernstein and Sweeney’s and Smith’s, remains inaccessible today and, I would add, under-appreciated because of it, for all three of them serve as transitional works for the hypertext literature that would soon follow. In a sense Hypergate works are, on a evolutionary scale, that moment when interactive media branched into, on one side, Storyspace literature, and the other, interactive games. Only one other work published by Eastgate Systems, Inc. matched the aesthetic and the gameful quality of the Hypergate works: John McDaid’s Uncle Buddy’s Phantom Funhouse, published in 1993. It is interesting to note that it was not created with Storyspace but instead with the the close relative of Hypergate, Hypercard. To fully understand why Michael Joyce’s afternoon: a story had such impact as a work of digital fiction, one has to know about the interactive media that preceded it and, so, see how it fit into Eastgate Systems, Inc.’s vision of serious hypertext and introduced its own unique literary genre.

I end by saying that I lied when I suggested that the main reason I care about interactive media because of their historical and cultural context. The truth is, I am fascinated by the way artists use interactive media for telling stories and conveying poetry. Unfortunately, it is not considered scholarly to talk about a love affair.

[1] For more information about Amnesia, see the chapter about it in Rebooting Electronic Literature, Volume 1, published by the lab in 2018:  https://scalar.usc.edu/works/rebooting-electronic-literature/thomas-m-dischs-amnesia.

I would like to acknowledge Holly Slocum, the lab’s new Project Manager, for pulling me out of my grant-writing to explore DiChiara’s work with her. I thank Sarah Smith for donating this copy of DiChiara’s work to the Electronic Literature Repository for study by scholars. It so important for the future of e-lit to understand its past, and having this copy helps us achieve that goal. I also thank Mark Bernstein for responding to my question about the publishing history of A Sucker in Spades. It was difficult to find information about it since it is referenced (very briefly) only in three places: 1) Robert Coover’s “End of Books,” NYT, June 21, 1992, https://www.nytimes.com/1992/06/21/books/the-end-of-books.html;  2) The Electronic Labyrinth, http://www2.iath.virginia.edu/elab/hfl0200.html, though the site incorrectly states that the work is “Storyspace fiction;” and 3) in the bibliography found in Bernstein et al’s “Architectures for volatile hypertext,” published in ACM, Hypertext ‘91. Strangely, the work does not show up in WorldCat. 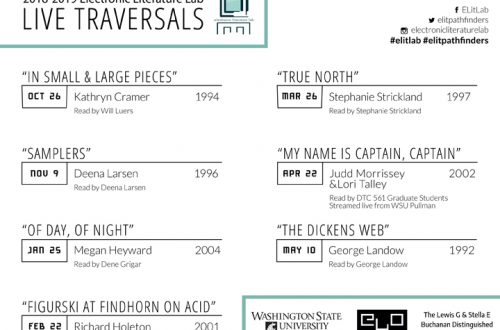