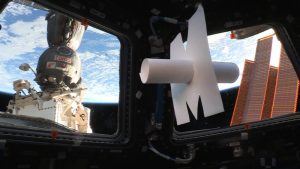 From Kac’s website: “Eduardo Kac has created an artwork aboard the International Space Station (ISS); French astronaut Thomas Pesquet realized it on Saturday, February 18th, 2017. Kac’s work, entitled Inner Telescope, was specifically conceived for zero gravity and was not brought from Earth: it was made in space by Pesquet following the artist’s instructions. The artwork was made from materials already available in the space station. It consists of a form that has neither top nor bottom, neither front nor back. Viewed from a certain angle, it reveals the French word “MOI“ [meaning “me”, or “myself”]; from another point of view one sees a human figure with its umbilical cord cut. This “MOI“ stands for the collective self, evoking humanity, and the umbilical cord cut represents our liberation from gravitational limits. Inner Telescope is an instrument of observation and poetic reflection, which leads us to rethink our relationship with the world and our position in the Universe.Since the 1980s, Eduardo Kac has been theorizing and producing art and poetry that challenge the limits of gravity. His Space Poetry manifesto was published in 2007. Now, in 2017, Kac finally realizes the dream he has pursued for more than 30 years: the creation, production and experience of a work directly in outer space. The astronaut’s mission is entitled “Proxima” and is coordinated by the European Space Agency (ESA). Kac’s project is coordinated by the L’Observatoire de l’Espace, the art-science lab of the French Space Agency.” See http://www.ekac.org/inner_telescope.html for images.

The Electronic Literature Lab’s collection of important––and fragile––works of hyperfiction and poetry published on removable disks are again the focus of this year’s Live Stream Traversals (re: performances) via YouTube. All seven events take place from 12 p.m.- 1:00 p.m. and are free & open to the public. 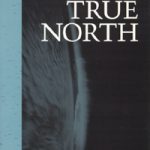