Day #3 (afternoon) saw the class learning how to fix a legacy computer whose monitor was “checker boarding,”––that is, broken. Leading this portion of the class was Jacob, John’s research assistant who has much experience with the computer collection that John has collected for the library. 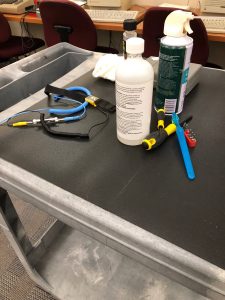 This photo (left) shows some of the tools Jacob used for this project. Note that you are looking at bottles of Goo Gone and alcohol, a ground he strapped to his arm to keep himself from potential electrical shock, and a soft towel. Not shown is the repair kit and the very long screwdriver needed to reach deep into the casing to remove the screws holding the computer’s shell together. 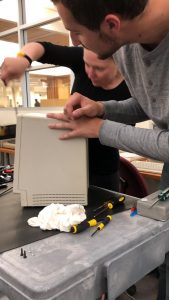 First, we removed the casing of the computer from the guts of the machine that were attached to the monitor section of it. This step is called “shelling” the computer. In the image to the left you see Jacob showing Twila how to separate the casing. The tool she used looks like a cross between a clamp and tweezers with a flat, thin (but tough) metal ends that make it possible for them to slip between the edges to open the casing. 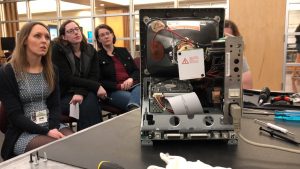 Here you see the interior of the computer once the casing was removed. Once it was opened, we looked to see if the computer was dusty or had some obvious issue causing it to not function–like a screw that may have fallen into the computer and shorted it out or if some component had burned. 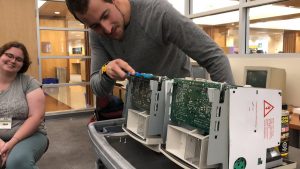 Jacob also showed us how to manipulate the brightness and contrast controls from inside the computer. We then turned our attention to the copper wires and the soldering that had been sloppily done. Turning the computer over, Jacob showed us that the motherboard was covered with mold–a sign that it had been in contact with water. So, he showed us how to clean the mold off the motherboard with Goo Gone and then finish the job with alcohol. 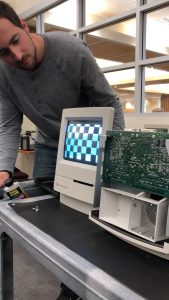 After all of this, Jacob turned the computer back on to see if the problem with the computer was indeed due to dust and mold. Unfortunately, the checker boarding was still present, but we learned a lot during the process. 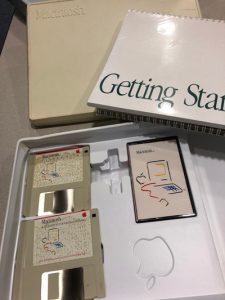 This course provides participants with hands-on experience and information needed for developing a media archaeology lab and/or understanding how to work with legacy software and hardware. Taught by John Durno, Head of Library Services at the University of Victoria, and Dene Grigar, Director of the Electronic Literature Lab at Washington State University Vancouver, the course covers topics such as hardware systems, software and platforms, collection strategies, emulation methods, and lab resources needed for maintaining retro machines and media.

Participants are encouraged to bring projects that need emulating, migrating, and/or documenting––and a willingness to get their hands dirty and have fun with retro machines and media.