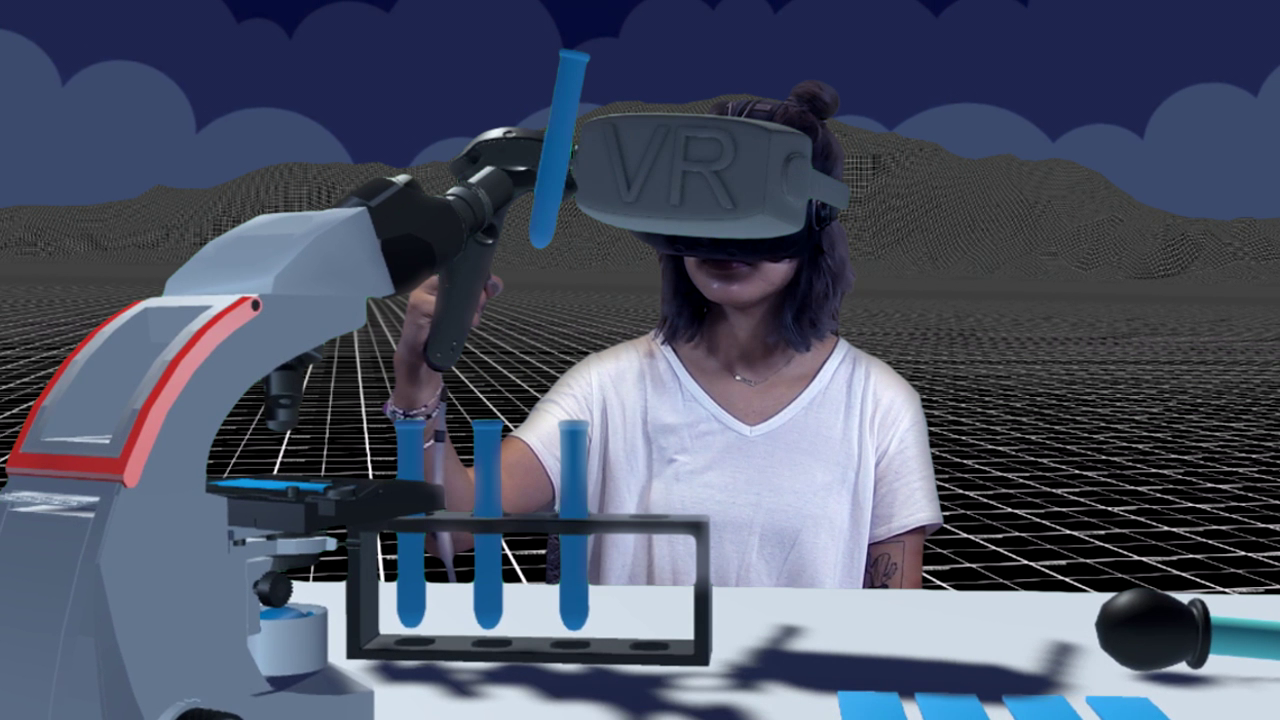 MicrobeLabVR employs multimedia like 3D visuals, sound, gesture and haptic events in an immersive and interactive environment. It allows for visual, auditory and kinesthetic learners to gain valuable skill development in a biology context. This multiple learning strategy also makes it possible to meet the needs of disabled students unable to undertake labwork due to physical restrictions.

The module requires commercially available hardware and software, some of which––like personal smartphones and tablets––are already used in the classroom, while others, like mobile VR, will become widely available in the near future. The desktop version runs on a VR-capable Windows or Mac PC, with NVidia GTX 960 or greater, a mid-range CPU and 8GB RAM; monitor, mouse and keyboard; a HTC Vive; and headphones. The mobile version requires GearVR and a compatible Samsung mobile device, gamepad, or input device. The module will be available via a free Steam account and the Android and Oculus Stores for Gear VR. Because BioLabVR modules are hosted in cloud-hosted environments, each has a small technological footprint. Additionally, instructors can set up their lab locally and generate and share content with students and other instructors.

In terms of software, MicrobeLabVR is built on the Unity platform, with 3D models produced in Maya and textured with Substance Painter on the open VR standard. Steam supports open VR, making projects produced for HTC Vive and Oculus easily accessible. Industry reports suggest that future VR platforms will also work with Steam.

Given the current interest and development of commercial VR, we are forecasting rapid changes in technology in the near 5-10 years. Mobile VR tracking will improve so that the current cumbersome and expensive full-room VR can be replaced with inexpensive, personal mobile VR headsets. Growth in mobile VR headsets, like Samsung’s Gear VR and Google’s Daydream, is expected to continue. Haptic interaction may be diminished as compared to full VR sets, but some haptic feedback will still be available for specific educational purposes.

Even a high end, dedicated multi-user VR system is ultimately more economical than the current physical science labs, which use expensive equipment and consumables, or are understocked and do not provide up-to-date training for students. True, lab VR systems may run in the low $100K, but they have the potential of replacing ALL possible science labs, including experiences currently considered cost-prohibitive for most students in the U.S. educational system and elsewhere in the world. For example, Ecology students can explore ANY biome through VR, while such an experience in real life will be available only to students local to that biome. Furthermore, such explorations can be coordinated between multiple VR learning facilities, thus creating shared experience for geographically and culturally diverse students and ultimately leading to better understanding of different cultures, problems, and worldviews.

The cost of deployment is relatively inexpensive. The mainstreaming of VR technologies means a lower cost in the future. Even now, a simple VR environment is priced under $1,000. Mid-range and a shared VR experience––that is, two or more students interacting together in a shared virtual lab environment––requires a computational cluster or access to commercial cloud system, technology widely available now in many colleges. Some school systems have mechanisms for shared use of the technology (like the Educational Service Districts in the State of Washington) or broadband access to cloud services.