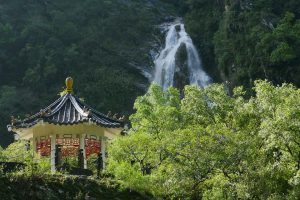 This week, I encountered an intriguing work called Taroko Gorge by Nick Montfort. Utilizing JavaScript, HTML and CSS, the author was able to create a generative poem that displays random keywords in a poem-like structure. Inspired by his trip to Taroko Gorge, Montfort uses keywords such as relax, dream, mist, cavern, vein, stone, forest, crag, and other terms related to nature and calm emotions. The work stands out to me because it has passed through many writer’s hands overtime. There are numerous variations of this work—all a writer needs to do is swap out the keywords for their own.

One variation I found was Pigeon Forge “Action Packed” by Zach Whalen. Though it was structured like Taroko Gorge (a stanza of four lines followed by a single line), the interface was almost reminiscent of a postcard, and I was reminded of road trips across the northwest. The keywords also reinforced this idea, which included asphalt, drive, moccasins and trail. The source code of this work is largely the same as Montfort’s, except that it utilizes different keywords to present a different theme to the reader. Toy Garbage is another variation, and reminds one of a children’s room. The background looks like the wall of a nursery, and keywords such as slinky, crawl, and play with are used.

As a reader of these renditions, I discovered the same effects across the combinatory readings. As more of the text was presented to me, I attributed meaning to those words and their connections with each other. They presented me with unique ideas that I had never considered before. As a result, I would argue that combinatory writing can produce inventive concepts that readers and authors may have otherwise never conceived of. As postmodernist author William Burroughs once wrote:

“The best writing seems to be done almost by accident… you cannot will spontaneity, but you can introduce the unpredictable spontaneous factor with a pair of scissors.” (Burroughs qtd. in Rettberg 2019, p. 26)

Though in this case, instead of using scissors to cut words from newspapers we would be utilizing computers as the “unpredictable spontaneous factor” that generates texts. Despite the author’s influence in the process (e.g. selecting keywords for the machine), what happens afterwards is completely left to chance. Though some may argue that random generators cannot create great works of literature (and indeed, even computers today can’t produce anything that comes close), I believe that it gives authors the potential to write something great for readers to experience. Oftentimes, an author’s best ideas come from the least expected sources of inspiration, enabling them to create memorable and strikingly original concepts. It is very possible that I will be applying random text generators to my final project, as the coding does not seem overly complicated and the results can be quite intriguing.