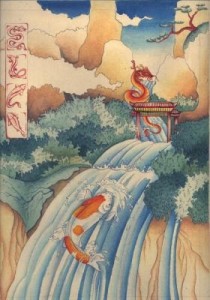 Before we begin, I would like to say that this type of reading is not my strong suit. What others may be able to comprehend, I will get stuck on or take a completely different route. After trying my best to read and absorb the knowledge from the first two chapters of Rettberg’s book, Electronic Literature, I began to see some connections between the book and Nick Montfort’s Taroko Gorge. As you may have noticed, the poem is very long and written with sentences that are honestly are worded in such a way that it makes my brain have to take five over and over again. So for my first “reading” of it I just observed its structure. The poem has this pattern where first it writes 2-3 lines that are describing something (such as a river or a forest). Then the poem inputs a space and writes something I would like to call an “action line”, a line that tells the reader that something is going on by using words such as “stamp”, “translate” and “enter” at the beginning of the sentence. We can see these traits in Stuart Mouthlrop’s poem Mock Tin Front. I believe both of these works were authored in a simple and interchangeable way. In Montfort’s, the author is having the reader create a forest. This is done by repetition of keywords such as “stone(s)”, “cove”, “rippling”, “monkeys”, etc as the text itself flows up the page as if it was a continuous flow of water. We see the same flow in Mouthlrop’s poem only this time the poem isn’t describing a forest. We see words such as ” instantiate”, “circuit boards”, “engines”, and “generate” as the text disappears at the top of the page. While the text still has that same flow the reader reads the poem a bit differently because of those keywords. Reading it over our mental depiction of the last poem’s forest slowly transforms into some sort of a machine. These transformations causes the reader to go from feeling calmed and relax to a more alert state of mind. With this in mind I believe these poems were both created in a similar fashion given the information that we have here. The poems were designed in the simplest way to loop but with a variation based on a set of keywords and a format that was determined by the author.