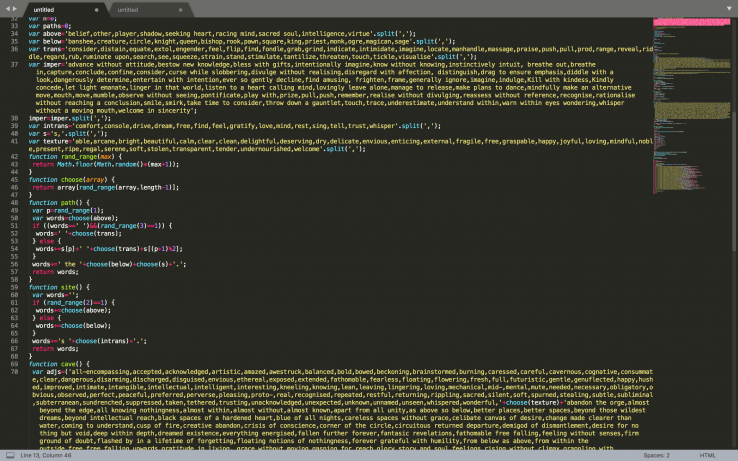 The concepts and ideas behind combinatory writing provide insight as to how poetry can be manipulated and enhanced through technology. Nick Montfort developed his poetry generator Taroko Gorge in the programming language Python, later converting the project to HTML, CSS and Javascript which not only made his work both easily accessible for web users, but also simple to hack and manipulate for other poets to engage with poetry through this medium. The open-source characteristics of Taroko Gorge allows for anybody to express their ideas through the medium of front-end web technologies and to expand the possibilities of what poetry can be by co-creating with the computer itself.

While analyzing some of the notable renditions of Taroko Gorge, it can be noticed that an infinite amount of ideas can be expressed through the generator by making simple adjustments to the source code. John Pat McNamara’s rendition, Take Ogre incorporates a background image on the webpage as a personal artistic decision to provide context for his work. The image of a desk and the impeding darkness of the night help articulate that he created his remix while isolated on Archill Sound, Ireland. Chuck Rybak’s remix, Tacoma Grunge explores themes of the Seattle Grunge scene while maintaining a minimalist aesthetic.

Each remix of Taroko Gorge is created by manipulating the keywords that lie within the Javascript variables, where the use of arrays organize the text. Due to the structure of the code that Montfort created, all of the numerous renditions of Taroko Gorge follow the same poetic structure, creating a sort of communal feel between each rendition.

While the work of Montfort certainly creates new possibilities for poetry and literature, it also has roots in the traditional ideas of  Surrealism. As stated by Rettberg:

“Surrealist writers and artists were just as likely to write together, and to freely mix image and text, as they were to write alone or in one medium” (Rettberg 25).

Combinatory writing and the work of Mantfort is not only a new and exciting form of literature, but is also a homage to traditional forms of art and poetry.