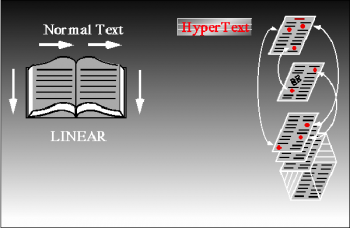 After going over the weekly readings, we can look at Hypertext, not as a classification but as a common term, the word hypertext is used to describe writing that is made possible by the invention of the computer and is created in the nonlinear or non-sequential space. Also, unlike print, hypertext offers numerous paths between text fragments. With its webs of linked fragments sometimes referred to as lexias, these fragments give us alternate routes that hypertext uses drastically with technology, giving us interactive independence which frees’ the reader from the author control. Hypertext users and creators are thought of as co-learners or co-writers, mapping and remapping the textual, visual, and kinetic components.

The mechanics behind “The Babysitter” follows somewhat of a TV guide listing. It is separated into sections, each of which links to a television program. From the beginning, Robert Coover uses key phrases to link the reader to characters. For example, the repeated phrase of “light brown hair” identifies Mr. Tucker, while “enough’s enough” or “that’s enough” identifies Jack. As the story develops, the character’s points of view begin to blend, and annoying attempts are made to differentiate among them. When we get to the end of the story, chaos has substituted the stories simplicity and reason. The shift in viewpoints is supposed to simulate channels changing and the fragmentation of realism in television. When we look at the beginning of the story, it was somewhat easy to recognize and distinguish the different points of view. By the end, it was somewhat jumbled.