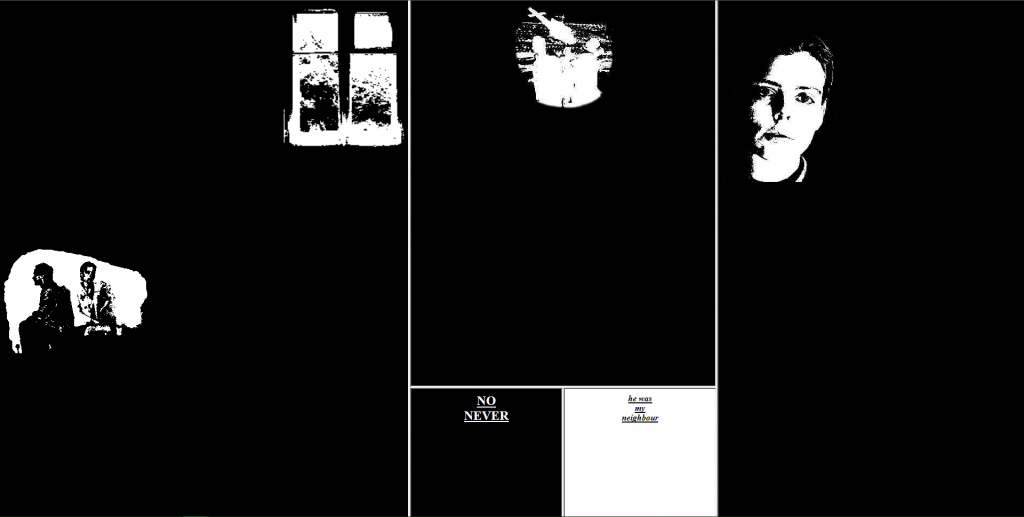 I chose to go more in depth with the work “My Boyfriend Came Back from the War” because it seemed to have peaked my interest the most and I’m glad that I read it. It’s just a simple story by Olia Lialina and supplies a lot of the HTML elements to it. The story is told through the narrative of two individuals, the girlfriend and the boyfriend and it’s about the two lovers reuniting after the boyfriend came back from the war. The story uses, what looks like to be, old school pictures and still images to tell the story as well as a kind of multilinear structure that when you press on a fragment it splits in half and gives us two choices on what we want to do in that situation.

“Lialina aptly uses the web to interrogate our understandings of the production and organization of memory, a question that structures her practice to this day. In keeping with this, she considers the numerous artistic remakes and remixes of the piece an extension of her initial investigation.”

I felt like the story taught us that even with an incomplete story you can still finish it, just opening you imagination and open your interpretation on the story piece. The themes that I found behind this work was really intriguing. I saw that there was pulsing imagery with the window as well as intertitles after each of the splitting images. One last thing that I would like to touch up on is that I felt like this story is really sending us a message but the problem is I don’t really know what message it is; it could be that were still at war in the middle east or maybe the fact that war changes people, once the individual leaves they will not come back the same person. Like I said… open to your interpretations.