Skip to content
IF and Games, Student Blogs
Elaina SundwallFebruary 15, 2019

I had a funny conversation with my father while traversing “Ad Verbum” by Nick Monfort. My dad came into the room and I mentioned that I was reading interactive fiction for a class, which I described to him as text-input based games which he had told me about playing when he was younger. He chuckled and said that he remembered games like that required you to use very specific words to be able to navigate them. I said that actually, I was mentioning it to him because I couldn’t do something in the game and I was wondering if he could help me guess the command. He immediately asked “Are you trying to go upstairs?” Yes I was. He told me to input “go stairs” and of course it worked. Here is a screenshot of all my guesses of how to go upstairs, and his answer. 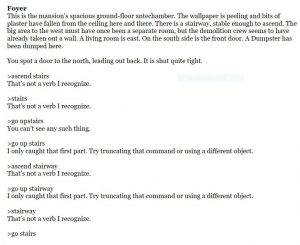 My dad even remembered the names of his friends that he spent an afternoon with in front of a computer guessing how to go upstairs. The first thing he remembered about interactive fiction was how difficult using the text parser was. Rettberg describes this feeling hilariously as:

“The actual experience of interacting with IF can however sometimes seem more like conversing via telegraph with a precocious chimpanzee who has worked out a compass and the possession of objects than conversing with an adult human.”

This aspect of IF is becoming less of a problem as technology improves and text-parsers become more intelligent. The challenge of thinking and communicating in ways that a computer will understand. What was originally a limitation of IF games has become a feature of the game and these types of games have an aspect of nostalgia today because of it.