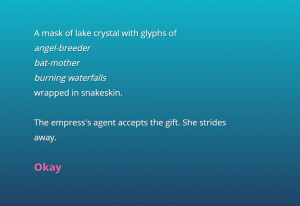 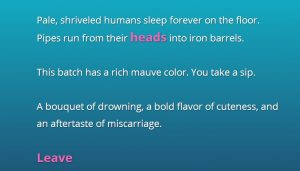 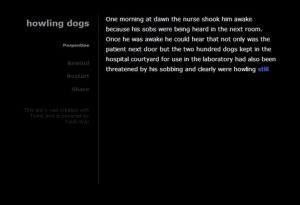 In looking at the “Those We Love Alive” (TWLA) I am intrigued by its repetition, as well as its descriptive language. The other piece I looked at was “Deviant” which after playing for a while I remember going through last semester. While Deviant was intriguing, I felt like I was running into the same problem that we have discussed in previous classes. Following the general character but not understanding the story or what is going on, due to lack of context. But after reading the authors inspiration of what inspired them to make deviant it makes a lot more sense. Looking at TWLA it was a lot more linear, so it was easier to follow I really enjoyed it. The tone and mood set by the colors and music are eerie but fascinating. I looked quickly at howling dogs and was surprised that they were both done in twine as well as TWLA seams like a more refined and completed piece but that was only my initial thought. E-literature has such a wide spectrum of what it can do that I will just learn and enjoy whatever I can.