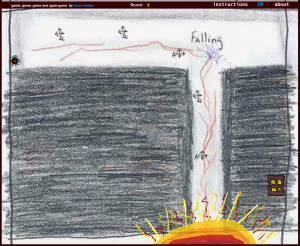 Out of all of the games presented in regards to the scope of the discussion, the two that stood out to me the most were Jason Nelson’s Game Game Game and Game Again and Porpentine’s Howling Dogs. While both of these works of interactive fiction are different and unique in their own ways, they both speak to how a small, close-knit community of individuals can create meaningful and entertaining games through a variety of platforms.

Howling Dogs is a work of interactive fiction created with the platform Twine that explores the idea of how games and hypertext fiction play on each other to create a storytelling experience that also feels game-like, as opposed to a more traditional story. As stated by Rettberg:

“While the underlying principles of Twine are based in hypertext, many Twine games have also adopted conventions from interactive fiction, such as second-person form of address to the player character, spatial navigation through the narrative, and a sparse, economical style of writing” (Rettberg 105).

Howling Dogs certainly displays some of the characteristics of a work of interactive fiction described by Rettberg. The player is placed in what is described as “A room of dark metal” and is given the option to navigate through the game by choosing through a selection of hypertext links that take the player through a variety of different scenes.

Game Game Game and Game Again on the other hand, is much more “game-like” in a traditional sense, although it does have its quirks. The player is tasked to navigate through a set of thirteen levels by using the arrow keys and space bar to move and jump, respectively. What makes Game Game Game and Game Again especially unique however, are the narrative elements that are added to the experience, such as the home videos that pop up on the screen and the graphics that hint at a particular message that Nelson is trying to convey.