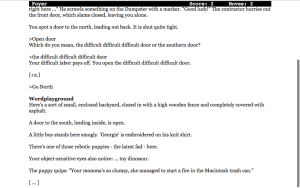 After reading Rettberg’s chapter on Interactive Fiction and Other Gamelike Forms, and briefly taking a look at all the works, I decided to take a deeper look at Porpentine’s With Those We Love Alive and Nick Monfort’s Ad Verbum. I wanted to select two works that were significantly different from one another in their approach. Porpentine’s piece has a poetic vibe. I would say that the framework of the piece is more of an exploration of literary ideas. It involves the reader by having them make selections from author chosen lists, which Porpentine used as a way to guide the reader through the narrative. As the user, the choices that you make dictate the way the narrative unfolds, however the choices  don’t necessarily change the outcome of the story you end up reading because you are limited to the words given to you by the author. However, IF works like Nick Monfort’s Ad Verbum have a different approach.

As Rettberg mentions in his book, “The reader becomes the player” (89), which I definitely got a sense of while I was interacting with Monfort’s work. Ad Verbum involves the player in finding a solution to a problem presented. While I was going through the piece, I felt like a detective gathering clues and making decisions based on what new information was revealed to me.  I would also say that Ad Verbum sparks your imagination while interacting with the piece.
Through descriptive writing of setting, character, and action, both works encourage the user to use their imagination which enhances the experience and aids in the overall understanding of the message that is trying to be communicated by the narrative. I think that both of these pieces touch on Rettberg’s notion that

“The principal challenge to the reader of interactive fiction, and it’s central pleasure, is to find a solution, to achieve satisfaction of a successful session of deductive reasoning.” (90)

I found myself enjoying both pieces for different reasons. I enjoyed the use of multimedia in Porpentine’s piece. While it was much more like reading a story, being able to interact with the work was enjoyable. Ad Verbum was a little bit of a challenge for me to work through, simply because I had to think more about how I was going to respond as I was going through the piece. I still found it fun to work through.