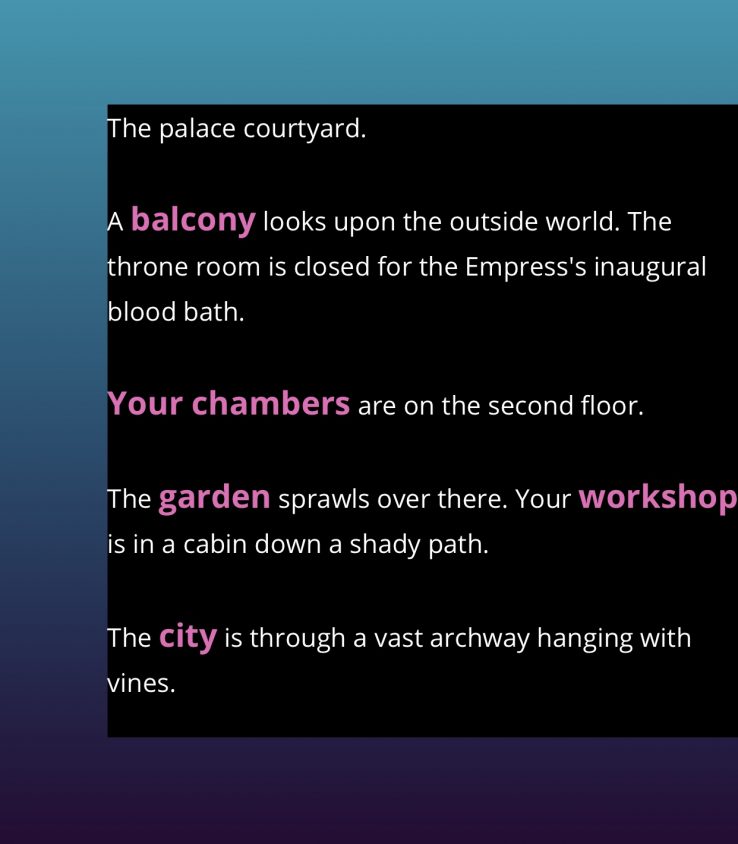 I explored “With Those We Love Alive”, by Porpentine, and “Howling Dogs”, also by Porpentine. I didn’t intentionally explore two works by the same author/creator, but after doing so, I believed I got a far better understanding of the author’s methods. Both of the works seem to center in on a dark, twisted society and the daily mundane tasks of members of that society. In “With Those We Love Alive”, we follow our protagonist, a creator hired on by the empress. The world is dark and filled with muck, and the occasional dead person who is staring at you. The empress is described almost in a monstrous way, with horns, oozing ichor, and rotting flesh. The empress hunts humans, and human body fluids are drunken. The city is falling apart, ridden with monsters, stains, and rot. The protagonist also has to refuel on hormones, and imagery is used to describe the glow of veins pulsing with hormone. “Howling Dogs”, although not as visually interesting, carries a similar theme. The protagonist wakes up in a cold, sterile almost hospital-like room. The protagonist then has to do daily tasks such as drinking, eating, throwing out garbage, before heading into what is called the activity room. This room is described to have almost a virtual reality visor, that continues the main storyline for the protagonist. Both pieces are very mysterious and poetic. The game is progressed through a series of link choices. “With Those We Love Alive” is a bit different than “Howling Dogs”, as it possesses links that can be alternated by the player. Both of these pieces involve the interactor or player, by forcing them to make decisions to advance the story line. While playing both of these pieces, I would often find myself stuck in the storyline, if I didn’t find the correct link that would advance it. The links also changed how the storyline played out, and the circumstances that would be faced by the protagonist. These two works seem to follow more of a hypertext layout, then that of a game. While they both provide options for the player, these two games seem to be more of framework for a literature piece, rather than a game. The works are both incredibly mysterious, and engage the player’s imagination in a multitude of ways. The wording is poetic and ambiguous in nature, and each new prompt, brings up more questions and plot holes to fill. In my exploration of, “With Those We Love Alive”, I had stumbled on a friendship/romance storyline that seemed to hint at a big turning point for the two characters. They never explicitly stated what had happened but seemed to hint at it. I really loved these two pieces, and would love to get to a point where some of the plot holes are filled.