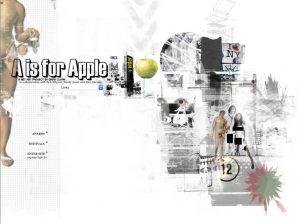 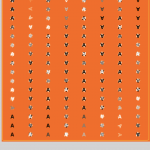 After looking through all of the works for this week, I chose two that stood out to me. The first piece I picked was “The Dreamlife of Letters” by Brian Kim Stefans. The digital poem was created from words written to him from a coworker during a roundtable conference. He alphabetized her words and produced a series of short digital poems. The poem’s text moves in different ways on your screen.  The text is responsive to other words and letters, but sometimes the text seems to only have the first letter in common, rather than the first few letters, or patterns of letters inside the word. At certain points of the poem, the movements of the letters match a word.

E.g. , “the word height expands and grows taller at first,       then shrinks away, while the word “drip” appears as the letter D falls down the screen.”

I felt excited as I made my way through Brian Kim Stefans work but nothing prepared me for A is for Apple. I watched this a couple of times, and I felt like I needed more. I went to David Clark’s page and started looking through more of his work, and I am thrilled to have discovered this man. All of his work is just beautiful, and I can’t wait to explore all of his stuff. For now, I will discuss A is for Apple. This piece is a Flash-based project that uses the hypertext to investigate the science behind an apple. The piece uses a sequence of links, looking for hidden meanings that come from the apple.

“The image of the apple leads to references and ideas borrowing from western metaphysics, popular culture, the history of cryptography, ideas of language, and psychoanalysis.”

A is for Apple was created using the model of a collage. Initially, paper collages were made. Those became the basis of a flash website where David and his associates made the page interactive and animated. One of the best Pieces of art I have ever scene.