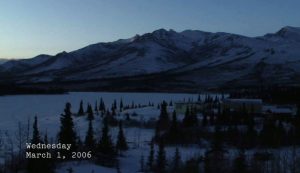 This week, I watched I Love Alaska by Submarine Channel. It is a documentation of search queries by an unknown user (which were unintentionally leaked by AOL), and then put together to create a narrative. The online network is made visible within the presentation through these search queries, whose familiar broken appearance are common in most online platforms. This user’s search history was unique in that the queries were long and specific, revealing to us a clearer picture of what was going on in their life. Indeed, Rettberg noted that

“[Network Writing] may interrogate the nature and materiality of the network itself” (Rettberg 2019, p.152)

This was especially true with I Love Alaska: though it was represented as a video, it felt like a commentary about the nature of search history. The choice to tell a narrative was eye-opening, as it caused me to reflect on my own search queries and wonder how I could create a story from them. It made me realize how much can be revealed about someone just through their search history, and how it can sometimes be a serious breach of privacy if recorded and used by someone else (even if only to sell products.)

In addition to raising points about search queries, this work has literary value as an unusual yet effective way to tell a story. The creator didn’t have to invent anything at all—they simply stitched pieces of reality together and left it up to the readers to interpret it. In this way, the narrative was a mystery, while also being a romance and a drama—all while drawing on a true story. Personally, I found I Love Alaska to be emotionally engaging because it was so dramatic. Most everything that happened to this user (as far as I could tell) seemed like it came right out of a movie, and I was constantly reminding myself that it was based on real events. It reminded me of Bigelow’s work How to Rob a Bank, which was also told through search queries (though the narrative was much clearer since it was an imaginary story.)