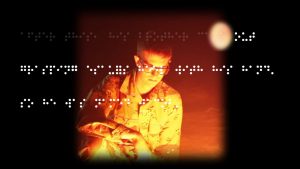 By far the most fascinating form of electronic literature discussed by Rettberg in “Divergent Streams” is virtual and augmented reality. VR is a concept I have discussed in previous DTC courses, because of my simultaneous fascination and fear of it. However, I have never looked at it critically as a vessel for writing, which I think is a potentially powerful tool for literature.

VR and AR are possibly the best tools for turning writing into a piece of technology by either creating a world for the text to live or giving the text the ability to live in our world. Rather than using the confines of available software and platforms, VR and AR allow the reader to interact in the most personal way possible by making the text a living entity that stands beside us. Rettberg’s provided examples of writing in augmented worlds, like Pry, showcase the powerful emotional connection that can be achieved via VR and AR.

Augmented worlds have proved to be scary yet exciting training grounds for the future of technological immersion. As Rettberg discusses, electronic literature is no exception. Augmented worlds hold a lot of potential for bringing pieces of poetry and writing to life to further encapsulate their meanings. Using the reader’s interaction to progress a story is a powerful tool for emotional connection, and VR and AR are easily able to do this. What is perhaps most exciting about the use of augmented worlds for electronic literature is the range of the works’ scales. A piece of writing in VR or AR can be short and simple, or it could be an entire world for a reader to explore that takes them out of body and puts them into a sea of text.