I think of all of the divergent streams that Rettberg discussed in this chapter, the one that interests me the most are interactive installations. I think what interests me most about them is that the narrative unfolds in an interactive physical space. As the viewer, you are able to physically experience the story in a very real and tangible way. 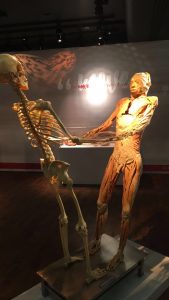 I recently went on vacation to Las Vegas and decided to visit the Real Bodies Exhibit at Bally’s. If you ever get the chance, I would highly recommend it.  Some may not really consider this an interactive narrative installation, but I would kindly disagree. Each “room” or area of the exhibit sets a scene that tells parts of the multi-level story about the human body. As you travel through the exhibit, you are able to explore various objects, specimens, and art pieces that coincide with narrative text written on the walls. As interesting and cool as it was to see all the various organ and body specimens, I think that the writing was my favorite part. It was very poetic and beautifully written. I think I ended up taking more photos of the written text than I did the actual specimens. Below is one of the photos I took of some text. I realize that the text is difficult to read from the image, so I included the text in the image caption.

As far as literary possibilities in the virtual and augmented worlds, I think there is a lot of potential. Along with new VR/AR literary works, I think that a lot of pre-existing works could also be recreated in the virtual space. In fact, the work that I wrote about for my ELD entry, Queerskins, which is an online multimedia novel, has a version that was created as an interactive installation that included a virtual reality experience. Viewers were able to interact with real life objects in real life spaces as they were described in the novel. I think that the interactive installations give the viewer a truly immersive and interactive experience. Click here to read more about these installations.