Pry is unlike any work I’ve ever seen. It utilizes the affordances of a touchscreen device to tell a story through tearing, pulling, pinching, and spreading out. It also reflects the nonlinearity of digital information (as many of the works we’ve previously examined have) by telling the story in seemingly random fragments. By combining video and text, Pry reflects the differences between memory, imagination, and present reality, which are the three things that James is trying to come to terms with. 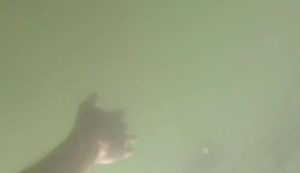 One of the moments that intrigued me was the moment that James falls off of the bridge and into the water below. For a moment, I had tricked myself into thinking that I was actually falling off the bridge. I think that after playing the story for a long period of time, I began to feel like I was the main character. I could relate to the protagonist’s struggle by having to trudge through the work: to progress the story, I had to physically pull text apart, fight to keep the character’s eyes open, and try to mentally piece the story together. These three factors created this sense of immersion that I have yet to experience in games that aren’t VR, and I found it rather enjoyable to play.

I found the text to be just as intriguing as the video montage. I usually find books to be immersive because it engages with the imagination, but having to physically manipulate the text took it to a whole other level. It added another layer of conversation about the narrative itself by reinforcing my understandings of the text. It also helped maintain my interest because I could choose which topics to more deeply explore (one of my personal favorite ways of doing this was by tearing open the text).

Overall, I found Pry to be an incredibly immersive work and intriguing to explore. I look forward to seeing the direction we’ll take literature from this point.