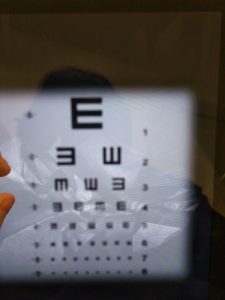 I believe this occurred during the first chapter (?). Pry likes to drop hints very quickly on the readers. This one included. In the beginning, Pry rapidly tells us something about “symptoms”, “common”, and “violence” when we close the protagonists’ eyes. This led me to believe that he is probably suffering from PTSD. If that’s true what is this image doing in Pry? I believe it is hinting at not only is the main character suffering from PTSD (which also tells us he was a soldier at one point which is supported by flashbacks and the prologue) but also that he is starting to go blind. We see this when Josh, in the second chapter, to gets blurry and closing his eyes simply doesn’t cut it anymore. 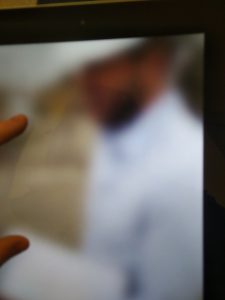 Here is an image of Josh, our protagonist’s friend, when his blindness was at it’s worst. Looking at this is almost trippy. It made me want to look away and blink my eyes several times to try and clear away the fog. 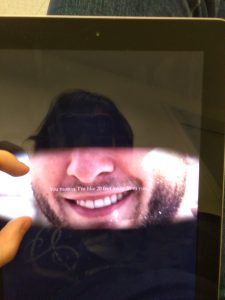 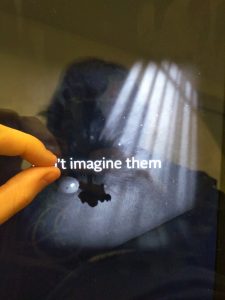 I find these images to be the most interesting because it tells me that the main character has more than one subconscious. If you adjust the pinch of your fingers on the screen, you get different levels of his subconscious. He has one that is on the surface level and is meant to distract his mind from not remembering the horrific things that he has seen. The other levels are hallucinations and memories of his subconscious. Jessie killing him, the coffee stain messing around on the ceiling. Those are all hallucinations that never actually happen. The memories are the GameBoy, hanging with Jessie, and possibly even the night vision video of a missile launch. This tells me that by the next chapter he might actually go blind and may even go crazy. In the second chapter, he spoke about how he depends on his job and Josh. With his sight gone it may be impossible for him to keep going. We will most likely see more of his memories and illusions of his memories as well while the real world might only be represented with sound and inner monologue.