I have had the pleasure of viewing this work last semester in another class and I think it is absolutely brilliant. This work is about a guy named James, a former soldier of the Gulf War, who works as a demolition consultant. James is going blind and also likely suffers from PTSD. Understanding these key details about James affects how the story is told and understood. The author’s use of all the different multimedia elements are what I think make this work so intriguing. The way that text montage segments were used to illustrate his subconscious are a perfect way to describe how erratic memories can be triggered. The use of video gives the user a first-hand look of what James sees in both present time as well as events that are parts of his memory or subconscious. There is also a lot of kinetic interaction used in Pry. This helps to tap into the user’s sensory modalities, which helps tell the story and influence the way that the user experiences the work. These kinetic interactions also give the user the feeling of a first-person point of view. The use of sound in Pry helps the story to unfold as well. It aides the user’s feelings of being immersed in the story. Spread and hold, pinch and hold, touch and drag are some of the actions that are required by the user in order to experience this work. The spread and hold action simulates the opening of the eyes. It is almost as if you, the user,  are “prying” the eyes open. The pinch and hold actions initiate memories or flashbacks. I would compare this action similar to when people squint or squeeze their eyes closed when they are trying to remember something or trying to not see something.

One of my favorite parts of chapter two was when the building was being demolished. This moment connects James’ present vision, current thoughts, and memories of his subconscious. It was at this moment for some reason that it really clicked with me how I am meant to understand each of the three spaces (eyes open, closed, and pinched to reveal his subconscious).

At one particular moment, what is seen when his eyes are opened, when they are closed, and when we are peeking into his subconscious all display same type of event, but in different settings. 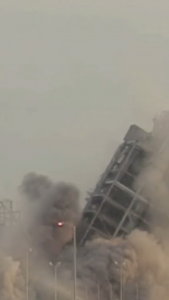 This is from the scene when his eyes are open and he is viewing the building is being demolished and an explosion occurs. 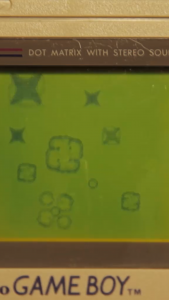 This is from the scene when his eyes are closed and he is having flashbacks of his time playing video games during his down time while he served in the war. Explosions are occurring in the game. 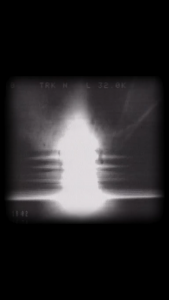 This is from the scene from his subconscious. Video montage of explosions are occurring in this scene.