Unfortunately, due to my forgetfulness and the fact that I don’t have an IOS device at home, I was unable to write about the first sequences of Pry on time for the previous blog entry. So, I will briefly summarize what I thought of the experience as a whole. I thought that Pry was an incredibly engaging piece of electronic literature, even despite the fact that it had me feeling confused quite a few times. I honestly can not summarize the storyline with any confidence as it all felt like a blur to me, but I feel like this was the intention of the piece. Everything throughout Pry seems to be told in an incredibly disjointed and unique manner for each chapter. I found chapter three to be memorable with its use of reading braille interactively.

When it comes to engaging sequences, I enjoyed the chapter titled “camp” in which pinching or expanding your fingers either changes shots during a scene or goes from one scene to another based on the context. At first, when I pinched my fingers, it appeared that the scenes were going back in time, back to when the main character was a child. Expanding my fingers seemed to move forward in time to the character’s time spent in the war. 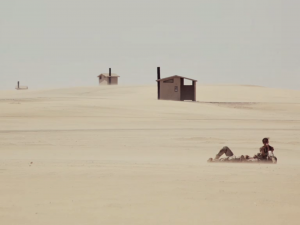 I definitely found myself engaged, but also confused at the storyline and sequence of events. If I had to see what the main theme of the story was, it would be the main character dealing with post-traumatic stress disorder or something to that effect. This can mainly be noticed during the characters subconscious flashbacks to explosions in a warlike setting when doing demolition work in chapter 2. I feel that this lends to my idea that the story being told in a confusing manner was intentional, because the main character’s mind is always racing and never at ease since the dramatic events that he had to go through.

Overall, I found this piece to be confusing but also engaging at the same time. I think this is because of its highly immersive interface. I enjoyed opening the character’s eyes and diving into his subconscious at a moment’s notice. I just wish I was better at following the general storylines in these pieces of electronic literature. I feel that it is something that will come more naturally to me with practice.