After replaying Pry, I think I’ve formed a more solid (if not yet complete) understanding of what the work is about. From what I can see, the protagonist is a soldier named James who becomes jealous of his brother because of his relationship with a woman named Jessie. What exactly happens between these three key characters is not all that clear, especially since James is constantly modifying his memories and remixing the events in his head. But that’s part of what makes the story so intriguing. Exploration is a key component in navigating the work, and having all the answers would defeat the purpose of the piece. For instance, I went through chapter 6 four times and found that every traversal was different. This may be because the chapter automatically ends at a certain point and forces the user to move on before they’ve fully explored it. Whatever the case, I was discovering new content every time I visited that section. After this experience, I feel that exploration is a key component that drives the user through the piece and solidifies their understanding of the narrative. 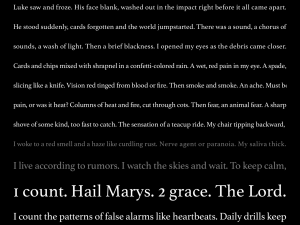 I would argue that one of the stronger themes in this piece is blindness. As we fight to keep James’ eyes open, we are constantly reminded of his failing sight. Like him, we are sometimes forced to withdraw from the present world and reside in the realm of memories and his subconscious. His innermost thoughts are communicated with us in text, sometimes in full paragraphs or in fast-paced fragments flashing across the screen. Through these, we can theorize the causes for his failing sight (a fire, a disorder inherited from his mother, and Jessie’s violent outburst are only a few of these.) By constantly going back and forth from what James’ sees in the real world versus what he sees in his mind, blindness becomes one of the more prominent themes in the story (though it is certainly not the only one.) 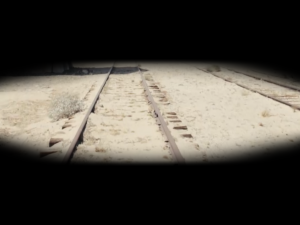 The form relates to the content by using unique features offered by touchscreen devices to reflect the depth and complexity of the story. By allowing us to “pry” open text and video, we may choose a direction and follow it for as long as it permits us. It presents us with seemingly endless seas of text and layers of video that create a sense of mystery, as well as a desire to investigate further. By presenting the content in this form, we feel a drive to engage with the work as the two components play off of each other in a well-balanced manner. 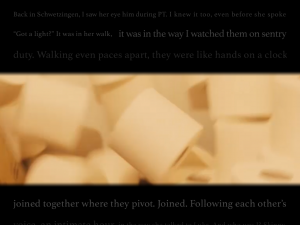 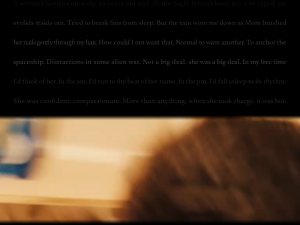 One of the sections I found intriguing yet puzzling was when Jessie begins accusing James and tears apart his photo album. Though James said she didn’t find it very flattering to have her picture next to his mother’s, I get the impression that the wound goes much deeper than that. During this scene, she blames him for being deported, possibly because James told on her relationship with his brother (the story makes a point that relationships in the military were not allowed). The fact that this scene was shown numerous times throughout the second half of the story also implies its importance, and I am curious to hear other people’s takes on this particular scene.