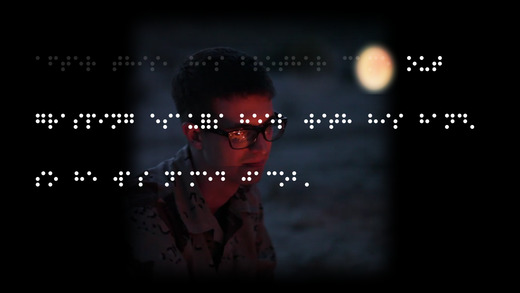 For my first read-through of PRY, I took quite a bit of time with the first two chapters alone, then realized that I was trying to explore everything the first time around. So then I went back and tried to explore just one linear level at a time, specifically, the storyline with his eyes open.

Through this path, the reader discovers that the main character is a veteran, perhaps recently returned, who works in construction for a former soldier buddy. Something happened that is causing the main character to lose his eyesight, and the surrounding narration implies that it occurred during his deployment.

Chapter 3 I found fascinating. The story is told through a simulated braille reading where the reader has to actually touch the screen, moving their finger over white dots while the main character reads the story of Jacob and Esau. In the background plays a slideshow of pictures of video of his childhood, where his mother is featured frequently. This serves to give the reader a real insight into what his life growing up was like, as he previously mentions that he and his mother would play braille reading games.

Chapter 4 was where it became a little confusing for me, as the main character is in a room with a military buddy and they are about to play poker but for a while all that happens is the main character watching his buddy shuffle the cards while he questions an attack in his mind. Then comes the slightly alarming part where it appears his buddy stabs him, implicitly in the eye.