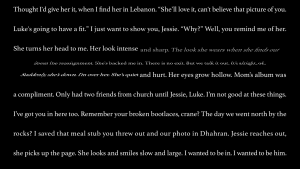 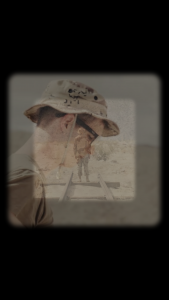 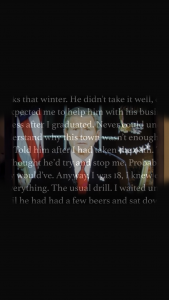 The second half of Pry mixes up the format even more with new ways to tell its story. Something that happened earlier but occurred again during chapter 5 was the protagonist’s eyesight briefly going numb. During this the moment, the user can’t see what is going on either, so they have no choice but to look at one of the other two perspectives until he puts in eye drops. This doesn’t necessarily limit how the story is told, but only how some of it appears. In chapter 7 the story takes on an entirely different form. Only a paragraph appears on the screen and the user can continually stretch it out, revealing more text. I found this one of the most difficult parts of the story to follow. Having to jump back and forth to different lines and figuring out how they are connected made the experience a bit frustrating. This exemplifies how involved the form is when it comes to the content. In Chapter 7, there is purely video that can swap in and out, creating multiple montages mixed together. I think the author made a creative connection between having the presidents George H.W. Bush and George W. Bush in the same chapter to illustrate that the world conflict represented in the story lasted several generations. I think the general theme of the story is redemption. The protagonist is trying to save himself from his own PTSD of war, but also clear up and make light of his understanding with his friend. Him going blind gives him more anxiety. As we saw, where people are the most anxious is deep inside.