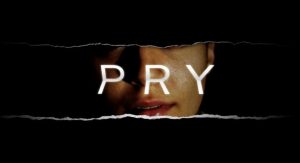 I thought the interactive elements of Chapter 6 and 7 of Pry were particularly well done. In Chapter 6 you must separate and expand the text until they have gained enough context. The chapter begins as an obvious beginning and an end and the user must physically push up and down on the screen to reveal more context. The text of this chapter leads to either a video which the user must hold open to watch or a rapidly changing chain of words between the lines that relates to the previous passage. The chapter tells the story of the protagonist having a falling out with some of his fellow soldiers and the regret he still feels for his actions. Chapter 7 gives the user the ability to progress through the life time of the protagonist through a similar action.

I think to fully understand this piece I would have to do several re-readings. The text always takes a backseat to the interactive elements in my exploration of the piece. I keep wanting to discover more about the piece than stay in one spot. The fact that you are able to collect items for the albums folder did not help. The album became a thing of very high interest to me as i tried to initially understand how it worked. From what I have read the story has been very engaging and emotionally heavy. The media surrounding the text is great for setting the tone, and the films usually contrast the bland color tones of the desert with bright and flashing lights during intense moments. Overall I think Pry is a perfect example of how Electronic literature has the potential to thrive in today’s environment with today’s technologies..