My final presentation, link to twine on the last slide.

Here is the link to my short interactive fiction project:

Two Worlds is an interactive fiction that explores the web and the physical world to tell a story. The goal of the player is to explain to their friend that they are in danger. However, the specific danger their friend is in will ultimately be determined by the player’s research in-game and the conclusions they draw from it.

The player begins in a room with two main components — a computer and a telephone— which they interact with to progress the story. By incorporating a computer, the player has an opportunity to explore a fictional internet by selecting various hyperlinks leading to different “pages” on the web, which are indicated by a change of color, font, and a gif. Whereas the telephone allows the player to communicate with NPCs (non-player characters) that track the decisions they make throughout the game, in addition to presenting dialog trees that the player may choose to follow.

The game itself was inspired by electronic works such as Galatea by Emily Short and Howling Dogs by Porpentine, but also reflects an experiment involving IF games and visuals. Galatea inspired the creation of complex NPCs that track the dialog choices made by the player. These choices are compiled and reiterated in a list of results shown to the player at the game’s conclusion. Numerous dialog trees were also created, which the player may fully explore after 18 runthroughs of the game. These trees allow players to make choices that influence the outcome of the story and reveal different paths, representing themes commonly found in interactive fiction.

Howling Dogs inspired the work’s changing background colors throughout the story, which occur whenever the player engages with the fictional web. These transitions serve to reinforce the idea that the web is a separate space from the physical world, differing in appearance, navigation, and content. Despite this difference, the player comes to rely on it as a primary source for understanding the world they live in and for informing their decisions. When the player steps away from their computer, they are transitioning from the world of the web to the world they live in. This central idea is what influenced the title of this piece, “Two Worlds”, as well as a creative way to integrate colors within the narrative.

In addition to drawing inspiration from Galatea and Howling Dogs, the work experiments with combining text and visuals within an IF game. It seeks to find a balance between these two factors while also finding a logical way to blend it within the story. While interactive fictions tend to place emphasis on the text over aesthetics, this work incorporates visuals such as colors and gifs. The gifs represent the multimedia aspect of the web, and how the internet can act as a window into other parts of the world.

In sum, Two Worlds is an interactive fiction game that explores two different environments— web space and physical space. This is done by indicating transitions from one world to another through the use of hyperlinks, colors, and moving images. It was inspired by Galatea and Howling Dogs, in addition to being an experiment that combined visuals with text-based games.

Out of the various forms of divergent streams discussed by Rettberg, the one that really caught my attention was locative fiction, especially in regards to AR. Up until the digital age (and particularly up until smartphones became commonplace), location-based art was fleeting. Street performances, outdoor concerts, flash mobs, and the like could be experienced only if the viewer was physically in the area; videos and retellings of the events are interesting but ultimately inauthentic secondhand narratives, unable to precisely capture the minute details of a live event. 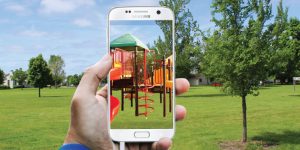 With locative fiction, however, the intimacy of neighborhood performance art is able to be fixed in time and space. It’s able to, in theory, be experienced by people months or even years apart, without any part of that experience becoming diminished through attempted reproduction.

The term locative fiction encompassed a wide range of e-literature styles, such as net art, kinetic poetry, or even hypertext fiction (perhaps the hyperlinks within the story change depending on where you are in a neighborhood?); they can also be wholly digital (such as a story that appears on your phone), or could be augmented or even virtual reality. Rettberg describes just how varied locative fiction can be:

We could investigate a murder mystery by retracting the steps of the killer at the scene of the crime. We could situate historical fiction set in a different era on the streets of the contemporary city. We could write poems, layered in augmented realty in the sky above the mountains they describe, as we sweep across the landscape and watch the live video on the screens of our phones (184).

In my opinion, the idea of augmented reality is full of the most intriguing literary possibilities. What if the historical fiction wasn’t simply a locative story, but a locative story set in AR? By tracing a path with your phone’s camera, you could watch the stories of famous figures unfolding in your very own city, with the modern world setting a sharp contrast–or, perhaps even show you how little your town (or the town you’re visiting) has changed by highlighting historical sites. Or, a library could have a multilinear story that shifts between genres depending on where you go within the building, leading you to suggestions for similar reading (digital and physical!).

Combining the intimacy and personality of a physical location with the creativity and wide-open nature of locative fiction, the possibilities are endless. The first piece of work that I wanted to explore was Jörg Piringer’s sound poems. I never was big into poetry but the word sound poem had me interested and I was curious and wanted to see what it was. What I thought it would be and what it turned out to be were two completely different things. I thought it was gonna be a bunch of random voices reciting poetry but what it turned was a bunch of random voices saying sounds. This made me question what the definition of poetry. What is a poem? Though it reminded me of when Scott Rettberg discussed how Readers can change sounds created in different ways. That is just what I did as a reader for Jörg Piringer’s poems. I created and changed multiple sounds just by clicking.

The second poem I explored was Cruising by Ingrid Ankerson and Megan Sapnar. This poem also uses sound but also uses images as well. The images can travel either fast or slow depending on how you control it and a woman’s voice is reading the text. I found that helpful to be immersive in the poem as I made the images travel fast so it felt like I was in a car looking out a window. It made a lot more sense to me as well than the sound poems did. It told a story that was easy for me to follow as the sound poems didn’t really seem to have any direction whatsoever.