My PhD research in Digital Naturalism, investigates the role of technology in in animal behavioral field studies. To empower new research, I combine theory and practices in the fields of Digital Media and Ethology via critical approaches to uncover cultural, technological, and biological factors shaping scientific practices.

While the foreignness of animals’ experiences necessitates the use of supplemental instruments like digital sensors and probes, the expense and complexity of some devices can steer researchers in erroneous directions. One scientist-participant in my research notes that “[many] experiments are designed around the set-up rather than the questions, and [this] limits the type of questions that we ask.”  Digital Naturalism explores Critical Making approaches to tackle these technological concerns directly.

Based on Ratto’s original paper [1], I launched projects like “Living Lightning” at a field station in Panama to teach both electronics skills and critical reflection.  A chance jungle encounter with gargantuan lightning beetles inspired my design of a workshop that would simultaneously let participants understand the basics of digital sensing and acting, while also exploring the fireflies’ strange rituals first-hand. 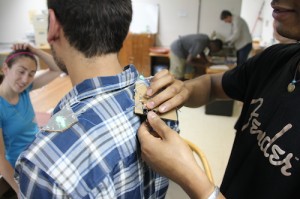 Participants built and programmed their own wearable firefly costumes from materials including cardboard, LED’s, copper tape, and inexpensive ATTiny85 microcontrollers.  At each step of their design, participants “purchased” components by receiving different reflective prompts on which they were asked to meditate. In parallel with the building process itself, questions such as “What part of your tool can tell a lie?” prompted critical analysis and discussion of the technological, biotic, social, and environmental structures pervading this project and their research. The costumes were then worn into the fireflies’ natural habitat, as we performed embodied simulations of their mating rituals.

Consulting local firefly expert, Fred Vencl, helped us initially design the costumes’ flashing patterns and script our performance, but the construction and performance were necessary for obtaining deeper understandings. One of Critical Making’s other pioneers, Garnet Hertz, states, “doing something yourself, as a non-expert, is the fastest way to unpack and learn about the things that would normally remain invisible and taken for granted” [2]. In the workshop, our hybrid making-discussing brought up concepts about the scientists’ other tools, social origins of digital devices, funding issues, and the basic factors (such as faulty soldering) which can manipulate “truth.” Performing the devices in the wild with each other and with the fireflies themselves spurred iterative reflection on our designs and how they revealed or ignored certain attributes of the environment or the insects. Critical Making’s hybrid material-analytical process incorporating technological, social, and biological factors provided insights beyond research with fireflies, and helped form a powerful framework for scientists to develop and understand their own research tools.