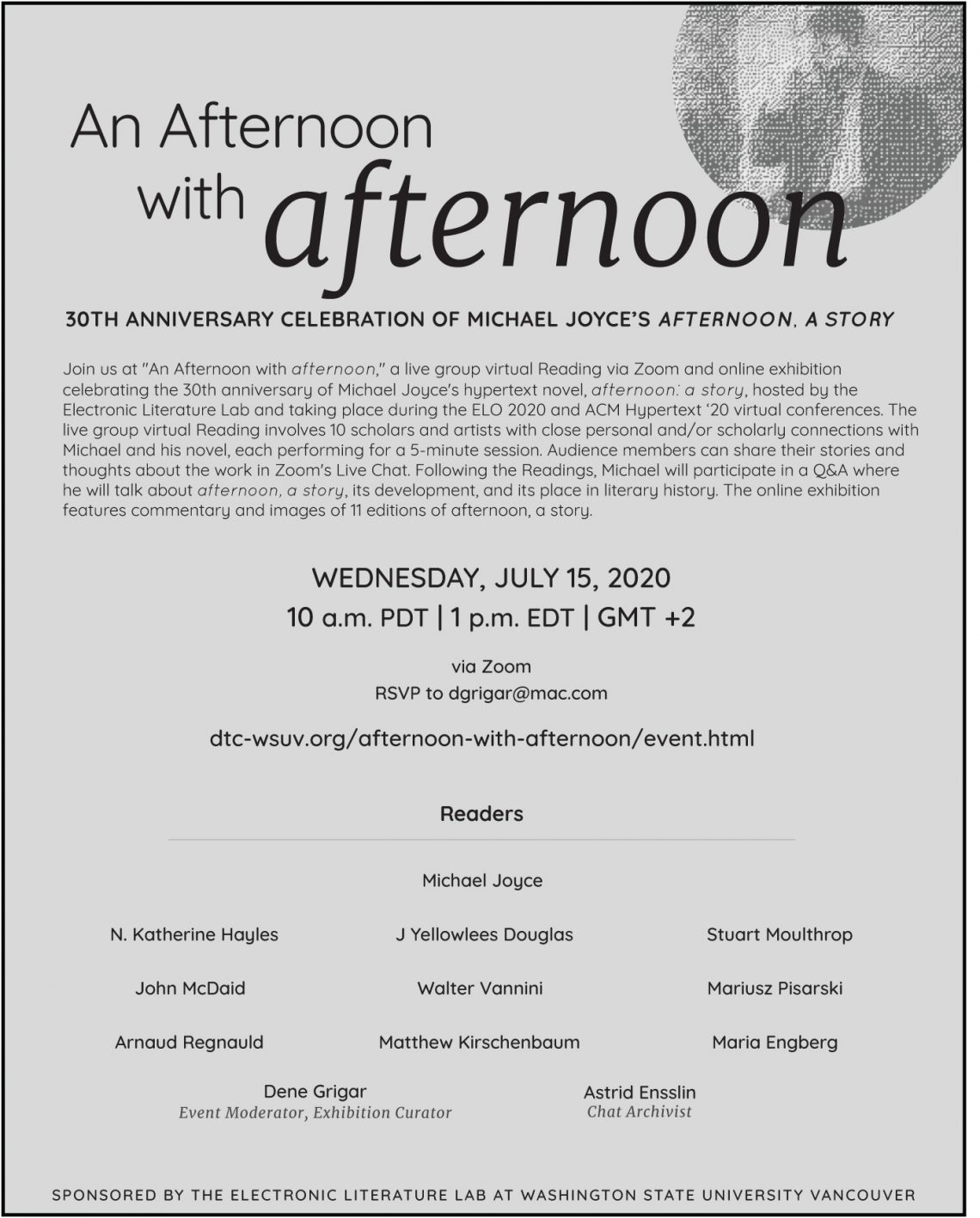 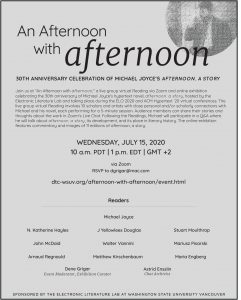 This year, 2020, marks the 30th anniversary of the commercial publication of Michael Joyce’s hypertext novel, afternoon, a story. While editions of it were given out at conferences and to friends in 1987 and 1989, it is 1990 that figures as the date it was sold through the publisher, Eastgate Systems, Inc. As media theorist Terry Harpold and I both agreed when we discussed the event this week, honoring this work is not a nostalgic act but rather one that allows scholars to revisit Joyce’s contributions to literary history and situate it in contemporary culture, one markedly different than the one the novel both emerged from and reflects.

Those of us around during the release of the novel may remember the rave reviews it received from The NYTimes, The Washington Post, and Utne Reader, to name but a few prestigious newspapers and magazines. Scholarly texts like Jay David Bolter’s Writing Space (1991) and George Landow’s Hypertext (1992) positioned the novel as the “touchstone” (Harpold) both for thinking about the shift in writing (and thinking) and for theorizing about postmodern criticism, respectively. When it was later published by W. W. Norton & Co. both as new online edition (1997) and excerpt in the Postmodern American Fiction: An Anthology (1998), many of us believed hypertext fiction  had formally been recognized as a literary form by the purveyors of print.

We may also remember the mood and tone of the novel, one that reflected the angst arising out of the Reagan-Bush years where trickle-down economics took precedence over needed societal reform. The extension of the Equal Rights Amendment (ERA) that guaranteed the rights of women under the American Constitution was denied in 1981, and it would take over another decade before the U.S. would formally recognize marital rape. The character Werther presented already in a harsh light in Joyce’s novel for his general lack of respect for women and poor treatment of his wife Lolly comes to represent today, in a world impacted by the #MeToo movement, the epitome of the white privileged male whose sexual behavior is less about experimentation (as Werther suggests) and more about exploitation––even of his older male underling, Peter, whose ex-wife Werther wants to sleep with. Joyce’s questioning of the subservient roles Black people still played in American culture in the late 1980s, decades after the end of segregation and Jim Crow Laws following the Civil Rights Movement, entreats us to wonder why it has taken three more decades and the Black Lives Matter movement to drive action against police brutality and continued racial discrimination. In effect, this novel––like all classic literary works––compels us to think about and question the world around us and reflect upon our belief systems and ideas. afternoon, a story brings to readers both the beauty of the written word and the pain words can cause when they reveal truths.

The Electronic Literature Lab is honoring this novel by hosting a world-wide reading of it via Zoom by scholars and artists who have been associated with it by writing about or translating it. The event takes place during both the ACM Hypertext ’20 and ELO 2020 conferences on July 15, 10 a.m. PDT, 1 p.m. EDT and GMT +2. Readers include Michael Joyce, N. Katherine Hayles, Stuart Moulthrop, J Yellowlees Douglas, Walter Vannini, John McDaid, Mariusz Pisarski, Arnauld Regnauld, Maria Engberg, Matt Kirschenbaum, and Heather Malin. Astrid Ensslin will serve as our chat archivist, and I will be hosting the event and moderating the Q & A. Assisting me with the Zoom experience will be Greg Philbrook, ELL’s tech guru; Holly Slocum, ELL’s Project Manager; and Kathleen Zoller, ELL’s Undergraduate Researcher.

Accompanying the reading is an exhibition displaying all of the physical manifestations of the 11 Editions of afternoon, a story. I have produced a curatorial statement that contextualizes the work and explains the method by which I have numbered the editions and versions. The exhibition also includes commentary about edition’s/version’s publication and production.

A special thank you to Holly, who designed and coded the site, creating for me the template to promote and document the celebration.

The event can be found on the ELO 2020 Virtual Engagements site: https://elo.cah.ucf.edu/virtual-events/.