Brief Note on Critical Making
I originally coined the term ‘critical making’ in work published in 2009 where I rather naïvely attempted to instantiate/describe a hybrid material-conceptual practice aimed at deepening and extending critical reflections on the material semiotic nature of technology. Since then I have continued to develop critical making practices and joint experiences and to publish my thoughts on the processes and results. I have two specific aims; first, to convey what I have learned from my own critical making experiences; and second, to try and encourage other scholars in the social sciences and humanities to take up making as an intrinsic aspect of their own critical scholarly practice. It is obvious from the increasing take up of ‘making’ as a trope within the digital humanities and other fields that either I have been successful in this regard or, more likely, I simply picked up on the value of material engagements slightly sooner than other scholars with similar critical interests.

I continue to believe that critical making is something that must be experienced – it is not enough to simply think about or witness the results of others. Equally, I believe that it is not enough to simply make – one must also try to expose the conceptual and critical processes (and not just the results) through whatever means necessary. This can and should include documentary traces such as video recording, still images, and textual descriptions but, at least for academic makers, should also include scholarly writing as a vehicle for communication with its own specific affordances and capabilities. It is not easy to be a critical academic maker given the conjoined needs for conceptual as well as technical forms of expertise. But I continue to believe that it is precisely this hybrid identity that offers the most rewards for scholars interested in both activating and extending past and current theories regarding materiality and the complex phenomena that marks the socio-technical world.

Overview of Fixsel workshop
The law and other formal and informal entities are used to treating ‘the digital’ and ‘the physical’ as two entirely separate worlds. We have been encouraged to think this way by a variety of public and private interests, including both libertarian (e.g. John Perry Barlow’s famous ‘Declaration of the Independence of Cyberspace’) and conservative voices (e.g. reasoning regarding the DMCA in the US,) depending on need. Over the last few decades, much labor has been spent to encourage the idea that information is immaterial, that form and content can be separated, that the medium is just a neutral channel for transmission.

The digital humanities was quick to pounce on the fallacy of the immateriality of information, with scholars such as Katherine Hayles, Joanna Drucker, and Matthew Kirschenbaum (among others) pointing out the political and social issues engendered by such a belief. Drawing upon feminist scholarship including the work of Donna Haraway, Hayles (1993,1999) highlighted the ways arguments about the immateriality of information worked to efface the embodied nature of human experience. Similarly, Drucker has described the ascension of ‘mathesis’, (2009) the prevalence of numerical logic that articulates the social and the political through the lens of quantifiable logics with an attendant focus on rationality and instrumentality. Matthew Kirshenbaum has noted that “computers are unique in the history of writing technologies in that they present a pre-meditated material environment built and engineered to propagate an illusion of immateriality”.

Details
The fixsel workshop serves as a simple, participatory way to guide reflection regarding the specific materialities of digital images. Using pre-made materials including a pre-programmed ATTiny 85 microcontroller, a printed paper template, an RGB LED, copper tape and other supplies, participants construct their own ‘physical pixel.’ 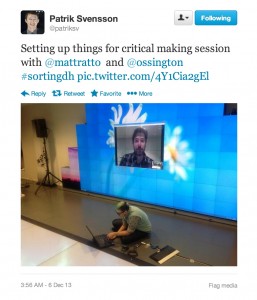 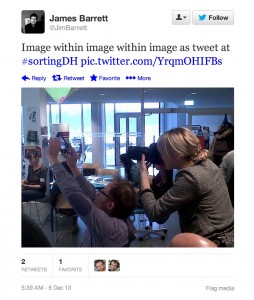 Conceptually, the participants are supported in their reflections by quotes and theories drawn from the work of the above scholars. In particular, Kirschenbaum’s conceptual framing of the digital as including both ‘forensic’ and ‘formal’ materiality is used to guide and deepen initial thoughts. The image chosen to be projected is Frederich Schinkel’s “The Invention of Drawing” as described in Joanna Drucker’s book Speclab. (see below) 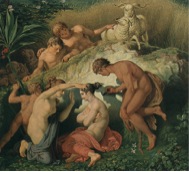 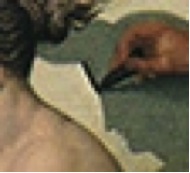