Born from the Oklahoma flatlands of farmers and thunderstorms, Jason builds digital poems, art games and curious digital creatures. He professes Net Art/Electronic Literature at Australia’s Griffith University. Aside from coaxing his students into playing with all manner of technologies, he exhibits widely in galleries/journals, with work around globe: FILE, ACM, LEA, ISEA, SIGGRAPH, ELO and other acronyms. There are awards (Paris Biennale Media Poetry Prize, ELO-Jury Award), organizational boards (Australia Council Literature Board and the ELO), and other accolades (Webby Award), but Jason is most proud of the millions of visitors his artwork/digital poetry portal attracts each year. 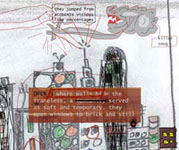 “Game, game, game and again game” is a digital poem, retro-game, an anti-design statement and a personal exploration of the artist’s changing worldview lens. Much of the western world’s cultural surroundings, belief systems, and design-scapes, create the built illusion of clean lines and definitive choice, cold narrow pathways of five colors, three body sizes and encapsulated philosophy.  Within net/new media art the techno-filter extends these straight lines into exacting geometries and smooth bit rates, the personal as WYSIWYG buttons. This game/artwork, while forever attached to these belief/design systems, attempts to re-introduce the hand-drawn, the messy and illogical, the human and personal creation into the digital, via a retro-game style interface,  Hovering above and attached to the poorly drawn aesthetic is a personal examination of how we/I continually switch and un-switch our dominate belief systems. Moving from levels themed for faith or real estate, for chemistry or capitalism, the user triggers corrected poetry, jittering creatures and death and deathless noises. In addition each level contains short videos from the artist’s childhood, representing those brief young interactions which spark out eventual beliefs. “Game, game, game and again game” is less a game about scoring and skill, and more an awkward and disjointed atmospheric, the self built into a jumping, rolling meander of life.