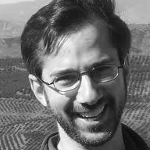 Mark C. Marino is a writer and scholar of digital literature living in Los Angeles.  He is the editor of Bunk Magazine (http://bunkmagazine.com) and the Director of Communication of the Electronic Literature Organization (http://eliterature.org).  His works include “Living Will,” “a show of hands,” and “Marginalia in the Library of Babel.” He was one of ten co-authors of 10 PRINT CHR$(205.5+RND(1)); : GOTO 10 (http://10print.org).  He teaches at the University of Southern California where he directs the Humanities and Critical Code Studies  (HaCCS) Lab (http://haccslab.com).  His complete portfolio is here: http://markcmarino.com

To experience “Living Will,” a story-game and interactive fiction, the reader must choose to be one of the heirs of Coltan-magnate E.R. Millhouse, who has made his fortune in the Democratic Republic of Congo. While reading, the heir navigates this unique legal instrument, slowly accruing medical and legal fees, while also grabbing bequests from her fellow heirs.  The piece explores the long shadow of colonialism, the conflict minerals buried in our mobile phones, and the heart of darkness of a dying imperialist seeking to extend his control beyond the grave.

“Living Will” was written using an open-source JavaScript platform called Undum developed by Ian Millington. The story can be viewed in a browser, though readers may want to “view source,” since several scholars have noted that the story continues into the code.  “Living Will” has been published in SpringGun Press and was on the shortlist for the 2012 New Media Writing Prize. It is being translated into French for bleuOrange Revue.