Michael Joyce’s most recent print novel, Disappearance, was published by Steerage Press in October 2012, with two novels, Going the Distance (SUNY Excelsior editions)— the first appearance in print of his 1994 online e-book— and Foucault, in Winter, in the Linnaeus Garden (Starcherone) to follow in 2013 and 2014 respectively. With Maria Engberg, and Jay David Bolter he is currently developing The Surface of Water: Worlds of Anders Zorn, an Augmented Reality blended panoramic narrative, created for mobile AR (smart phone or tablet). He is Professor of English and Media Studies at Vassar College. 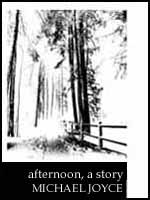 About afternoon:  a story

“Michael Joyce’s afternoon, a story is widely acknowledged to be the first ever significant, or “canonical,” hypertext fiction. Created in Storyspace and published by Eastgate Systems in 1987, it consists of text in the sense of typescript only and is strongly indebted to poststructuralist tenets such as rhizomatics, decentralization, de-linearization and non-closure. It is textually self-contained in that it does not include any exophoric hyperlinks. Excerpts of it were included in the 1998 edition of the Norton Anthology of Postmodern Literature. The text follows in the tradition of the psychological novel: the story features a homodiegetic narrator, Peter, who – so the narrative suggests – has lost his son in a car accident. Peter is deeply disturbed by his personal bereavement, his feelings of guilt and failed responsibility, and his general inability to come to terms with his existential situation as well as his social environment. His overall confusion and the way it is portrayed by the various layers of hypertextuality are amongst the prime concerns of this hyperfiction, and the ultimate answer to the question of what actually did happen is left at the reader’s discretion. Other than comparable narrative and dramatic male, essentialist psychogrammes like Franz Kafka’s The Trial (1925), J.D. Salinger’s The Catcher in the Rye (1951), Samuel Beckett’s Krapp’s Last Tape (1958) and Raymond Carver’s ‘The Bath’ (1981), however, Joyce’s pioneering work is primarily concerned with its own macro- and microstructural intricacies, which, make it a prototypical first-generation hypertext. After all, the resolving”afternoon” events alluded to in the title and in the first, inevitable lexia [begin], are not revealed in every possible reading of Joyce’s hypertext.” (ELD)