Nick Montfort is associate professor of digital media at MIT and president of the Electronic Literature Organization. He develops text generators and interactive fiction and has participated in dozens of literary and academic collaborations. Montfort co-edited The New Media Reader and The Electronic Literature Collection Volume 1 and wrote Twisty Little Passages: An Approach to Interactive Fiction, Racing the Beam: The Atari Video Computer System (with Ian Bogost), and Riddle & Bind. His latest book is 10 PRINT CHR$(205.5+RND(1)); : GOTO 10, a collaboration with nine other authors about a one-line Commodore 64 BASIC program. 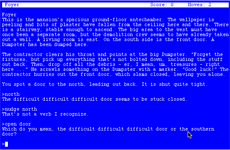 “Ad Verbum” uses writing techniques of the sort developed, beginning in the 1960s, by the members of the French group Oulipo. In “Ad Verbum,” the player types commands to interact with a simulated world, moving to different spaces, collecting objects, and and encountering characters, as is typical in interactive fiction. However, not only what is done by the player, but also how the typed input is expressed, is important in “Ad Verbum.” To effect action and solve puzzles, the player must determine the underlying principle of different texts and must write in a way that is consistent with them. This interactive fiction was written using Inform 6, is in the Z-Machine format developed at Infocom, and can be played on practically any computer or smartphone.