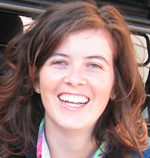 Cynthia Lawson Jaramillo is a Brooklyn-based Colombian digital artist, technologist and educator. She is Associate Professor of Integrated Design in the School of Design Strategies at Parsons The New School for Design. Her artwork, centered on themes of time and transience, has been internationally exhibited. She has a B.S. in Electrical Engineering from Universidad de los Andes (Bogotá) and a Masters in Interactive Telecommunications (ITP) from New York University. She is a founding member of Occupy University.

Paul Ryan is Associate Professor of Media Studies at Parsons The New School for Design. He authored seminal texts on video published in Radical Software (1970–74), as well as The Three Person Solution (2009), Video Mind, Earth Mind (1992), and Cybernetics of the Sacred (1974). The Smithsonian Institution in Washington is archiving his Television Ecochannel, his Earthscore Notation and his Hall of Risk Program. As part of his participation at dOCUMENTA (13) he wrote Two Is Not a Number which describes his concept of Threeing and the Relational Circuit. 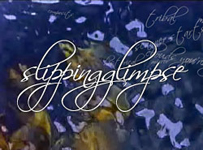 The eco-poem “slippingglimpse” allows words to interact with the motion patterns of Atlantic waves captured off the coast of Maine. Reading in this poem—any active move toward interpreting or reacting to a word or bit of information—is accomplished by both human and non-human agents (water, computer processor, video camera, words) treated with equal respect. The wave patterns in the water exert their “force” on the lines and phrases of the poetry. Because a motion-tracking algorithm is “reading” the motion in the water videos and “writing” numbers into a reference table, the poem phrases are able to be read by this motion and their repositioning accordingly is a form of writing, writing done by the water! Human readers are offered three modes of interaction:  watch the water read the poem-text (full-screen); read the print poem-text itself at any speed, in any direction (scroll-text); contemplate the patterns that the video camera captured (hi-rez). Choosing (regenerate) will initiate the reading process anew with a different set of words.