This is a second attempt at “continuity”. After seeing the submissions of other students, I misunderstood continuity framing. I realize I was off the mark with the volleyball video (perhaps it’s more of a montage?)

For this visit to ULTA, I took videos of Lynelle, getting her brows done by Chrissy, the Benefits Brow Bar specialist. Lynelle has seen Chrissy for several years. And, since Chrissy has already been featured on Facebook Live by another client, she was open to being the subject for my school project.

While editing, I found I missed many opportunities to truly tie clip-to-clip:

— Once in ULTA, I don’t have footage from within the doorway to the Brow Bar ( Well…I did realize I shouldn’t video other customers.)

— The direction the camera was moving was not inline with the direction Lynelle was looking.

— Chrissy was fast. And, I didn’t think to have her slow down or reshoot every step of her application of wax.

— The process of getting brows done:

It’s still a mystery to me of how to present continuity, whether it’s obvious and shown in the clip. Or, when you can use other methods to allow the viewer to make connections via context clues.

To observe a movie by it’s cinematic production — how the cuts add to the story or the meaning behind framing — this is new to me, an exercise that I don’t do. For example, Will explained “160 Characters” and how the editing convey ‘time passing’. Interesting …

In Run Lola Run, I enjoyed the first outdoor running scene where she is running to her father’s. I enjoyed the usage of extreme long shots that panned into extreme close ups and the switching back and forth on the bridge between medium shots and close ups. This created a sense of urgency while showing off the city. 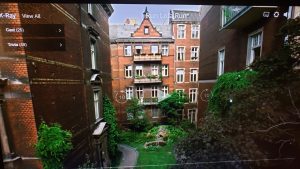 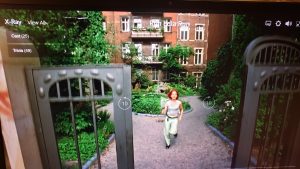 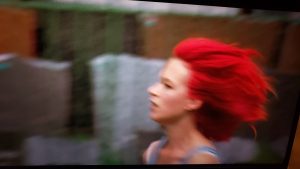 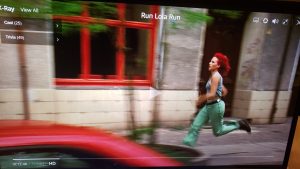 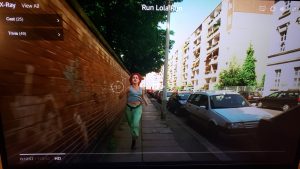 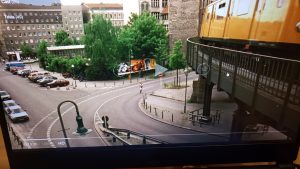 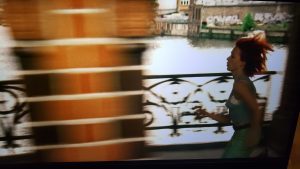 This is my framing project “who done it” assignment.

I decided to go with the rule of thirds the best I could within each frame. I randomly used objects and recording for this project. I did not script it. I feel like it came out as something that can be narrated. I am still waiting for my tripod and other equipment to come in the mail. I really enjoyed working on this. There are several different angles, and I used premier to speed up and slow down some shots as it is at 30 seconds duration. I mostly used medium close ups, and then some long shots for my cat. I hope you enjoy as much as critique, thank you. 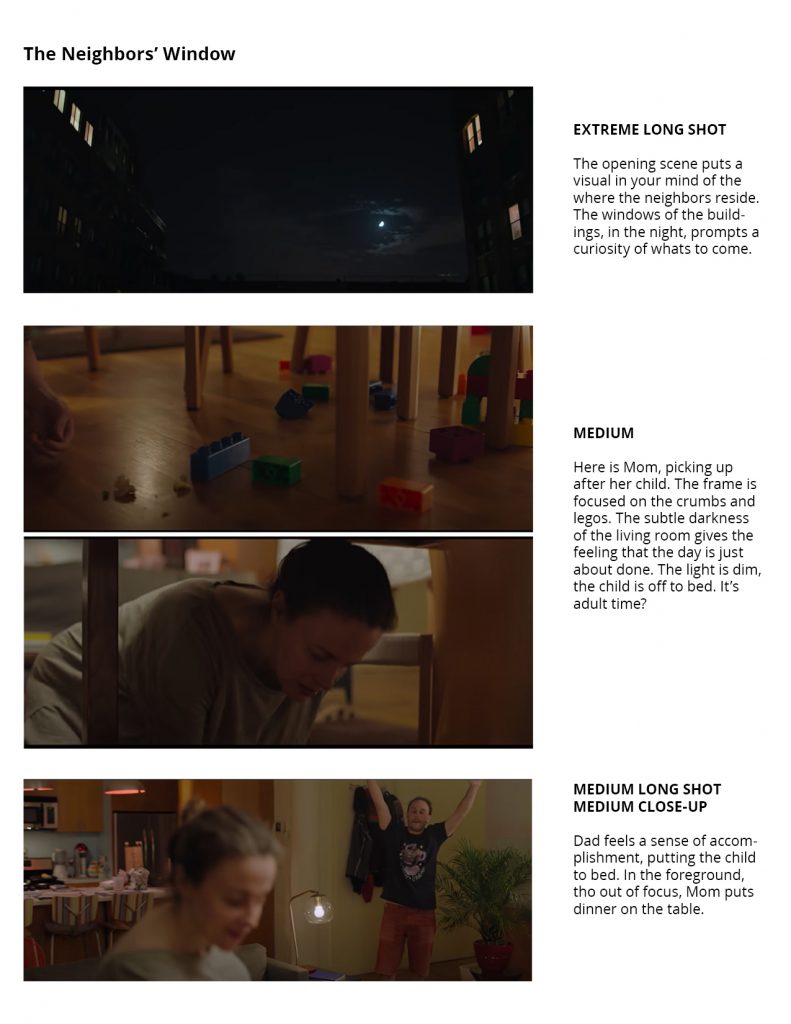 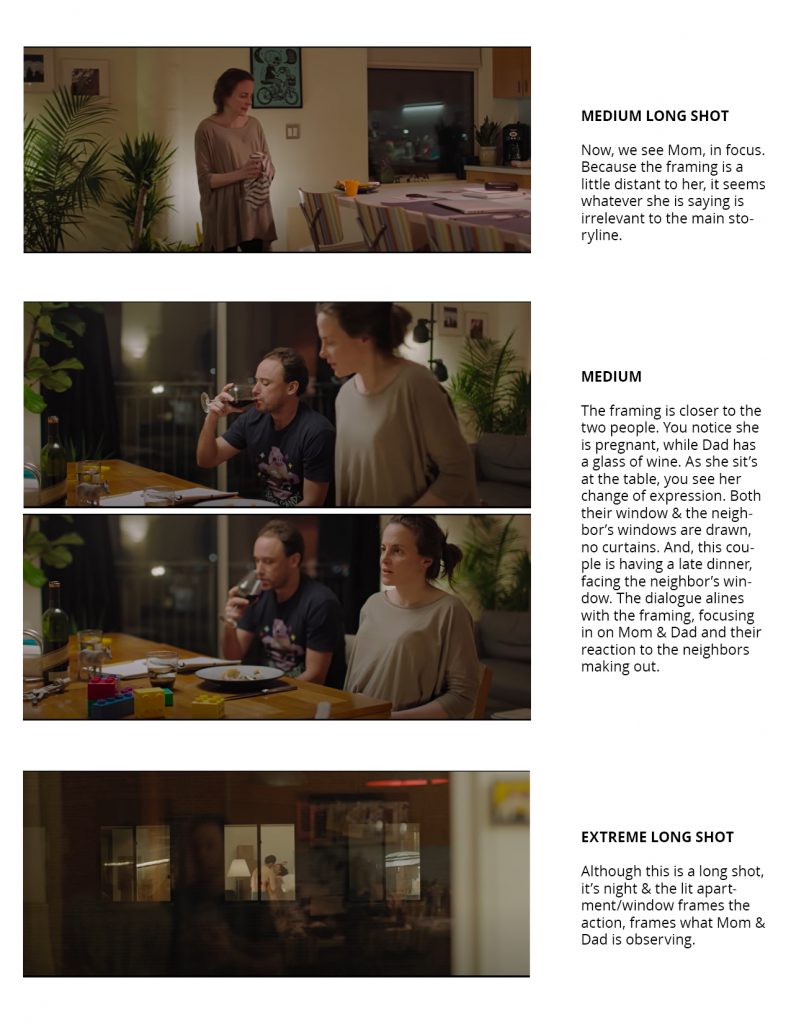 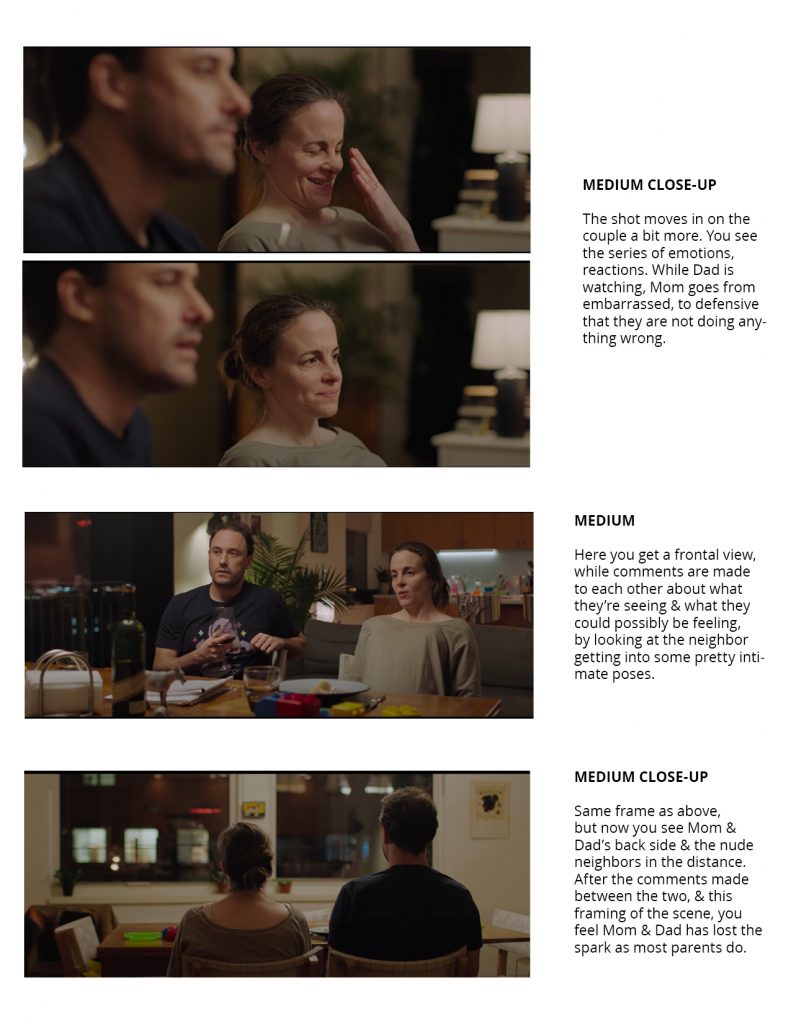 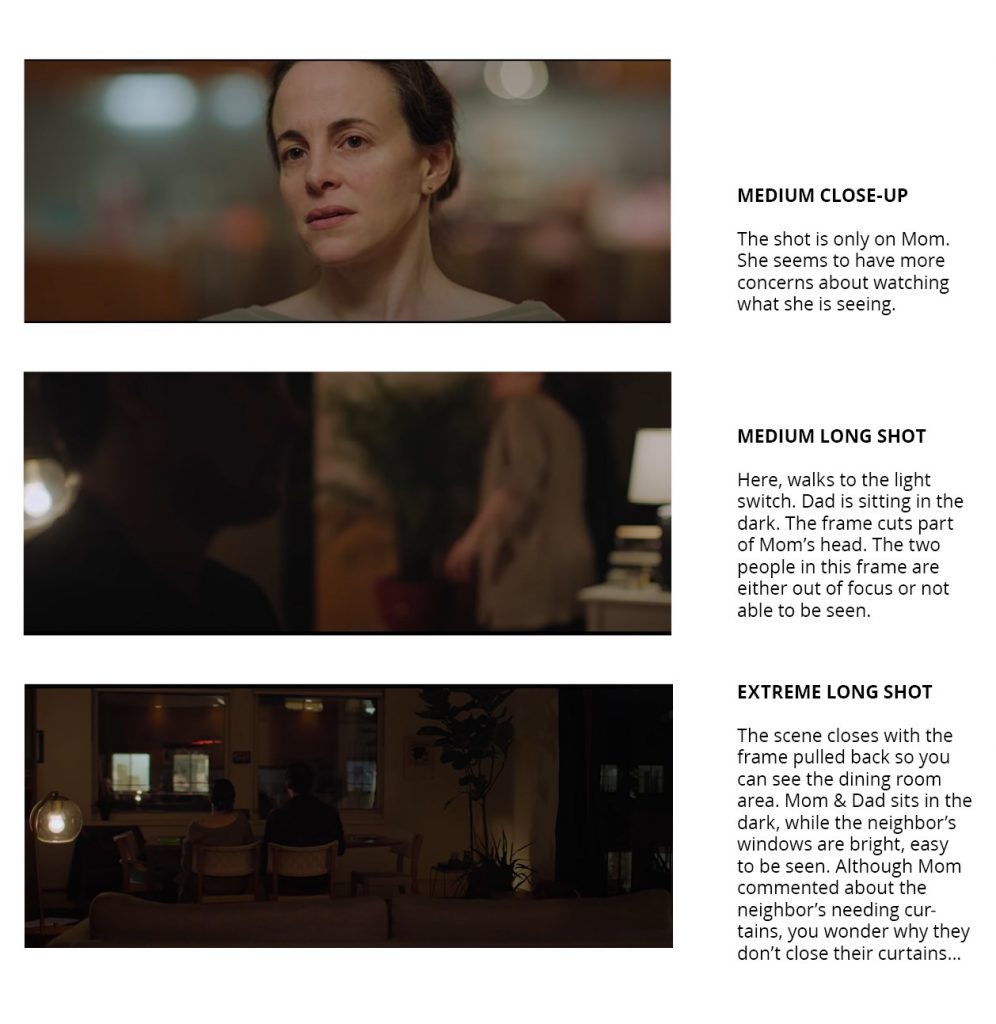 Aftermath: Long Day of Play is a short film focused on conveying a story through the use of framing. Our story begins with a medium shot of the dog’s toy box clearly in disarray. The camera cuts to an extreme long shot showcasing how the dog has strewn toys across the room before cutting again to a long shot of the dog sleeping. Next, the camera cuts to an extreme close up of a stuffed dinosaur toy that has stuffing coming out of one end. These shots convey a former chaos returning to peace now that the dog is asleep. This idea is further supported by cutting to a pair of close up shots of the dog at rest. The film ends with a long shot to bookend the piece and re-orient the viewer before moving to a new scene.

The scene that I chose is the jump scene from Free Willy.
The scene begins with Jesse trying to convince Willy that it is okay for him to leave. The shots are tight on their faces, establishing the closeness of their relationship. As Jesse begins to lead Willy towards freedom by running on the jetty, the shots pull out and pan along with the subjects in frame. This builds anticipation. The camera then cuts to the three groups of people watching: Rae and Randolph, Annie and Glen, and Wade and Dial. This helps establish the environment as well as reminds us of the personal connections to the whale. We then cut to a wider shot of Jesse on the jetty, urging Willy to jump. The shots of Jesse and Willy get progressively wider and longer, building suspense and anticipation. We cut a few times back to Rae and Randolph. This jump from long shots to close ups helps even further build the anticipation, by creating more tension around the personal relationships that these people have with the whale. Moments before Willy’s big jump, we get a bunch of close-up shots of the water, Jesse and Willy. This is building, not only anticipation for the jumping but for the conclusion of Jesse and Willy’s friendship.
Shots 22 through 26 are the climax of the scene: the jump. Shot 22 and 23 are these grand long shots that compositionally are different than the others: both Jesse and Willy are in the same frame (in full body). This signals the change, Willy becoming Free Willy (that and shot 25 where Willy makes it to the other side).
After this, the only shots of Willy are long shots. This separates him from the rest of the people in the scene, all of whom are given tight(er) shots.

Shot 1a continued, Jesse is still talking to Willy.

CU – High Angle – Static
Continued from 2a, Willy ”talks” back to Jesse.

Continued from 1a, Jesse continues talking to Willy.

CU – High Angle – Static
Continued from 2a, Willy blows air through his blow hole in response to Jesse.

Jesse is motioning for Willy to start swimming away, pleading with him.

Willy turns and begins to swim away from Jesse.

Jesse runs to keep up with Willy along the jetty.

ELS – Eye-Level – Pan Right, Keeping Jesse and Willy Middle Third
Jesse runs to the top of the jetty as Willy circles around.

MS – Eye-Level – Static
Jesse is telling Willy to go for it! Jump, Willy!

LS – Eye-Level – Static
Willy swims towards the camera from the center, arcing left then exiting right, close to the camera.

MCU – Eye-Level – Static
Continuing from 9a, Rae and Randolph continue to watch Jesse and Willy.

CU to ECU – Low Angle – Zoom In on Jesse’s Face
Jesse is waiting for Willy to resurface.

CU – Eye-Level – Static
Randolph begins to ”pray” in another language.

LS – Eye-Level – Static
Jesse holds his hand up to Willy, signaling him to jump.

MS – Eye-Level – Static
Camera follows Willy as he swims up towards the surface.

LS – Eye-Level – Static
Willy breaks the surface and begins to jump out of the water, Jesse standing on the Jetty in the distance.

MCU – Low Angle – Static
Jesse watches as Willy jumps over his head. Jesse turns around as Willy moves from bottom of the frame and exits at the top of the frame.

MLS – High Angle – Static
Willy enters the water on the other side of the jetty.

MCU – Low Angle – Static
Continued from 11a, Wade and Dial watch as Willy gets free.

MCU – Eye-Level – Static
Continued from 9a, Rae and Randolph hug in excitement at Willy jumping to freedom.

CU – Low Angle – Static
Dial mutters to himself ”God, I hate that whale”.

ELS – Slightly Canted – Static
Willy jumps out of the water and creates a big splash.

MCU – Low Angle – Zoom In
Jesse is happy watching his friend, Willy, go free! Camera zooms in on his face.

ECU – Low Angle – Zoom In
Jesse’s smile fades as he realizes his friend is gone. Camera zooms in on his face.

ELS – Eye-Level – Static
Just the water, no Willy in sight.

For this week’s inquiry into framing, I have decided to focus on the first scene in the post-credits sequence of Marvel Studio’s Captain America: The First Avenger (2011). The entire sequence can be divided into two parts: Captain America (aka Steve Rogers) waking up in a strange environment and his attempt to escape said strange environment. I am focusing on the first part of the sequence and examining how framing choices bring the viewer into Steve Roger’s plight.

Marvel Studios is now well known for their inclusion of post-credits sequences or “Easter Eggs” at the end of their films. At the time of release, Captain America: The First Avenger was only the fifth installment in the Marvel Cinematic Universe so each post-credit sequence was highly anticipated, and not a sure thing. Including a post-credit sequence was far for routine for most movies of the time, so every moment felt like a surprise gift for fans. This was especially true when the credits finished scrolling and the screen cut to an extreme close up of Steve Rogers.

Steve’s slow awakening and initial confusion about his environment mirrors the way viewers are trying to orient themselves within the scene. As Steve looks around viewers are able to see more of the “recovery room” Steve finds himself in. As both viewers and Steve become acquainted with the scenery, the scene shifts to a reverse angle of Steve sitting up.

The scene shifts tonally as successive cuts between a concerned Cap and the vintage radio playing in the background ensue. The back and forth here feels like Steve is tensely conversing with the radio broadcast. The tension is momentarily broken by a woman in period dress entering the room, however, tension quickly returns as Steve and the viewer begin to suspect something is amiss.

Body language and facial expressions are key to interpreting the unspoken motivations for both characters in the scene. The camera pans and zooms to reflect which person feels in control of the conversation. For example, when the woman initially enters we see very controlled medium shots of her standing square and tall, yet slightly turned away from the camera. In contrast, Steve Rogers is framed so he is looking over one shoulder at the woman and appears ready to run at any moment based on the way his hands grip the side of the bed. Ultimately, this allows the camera to further emphasize when Steve goes on the offensive in the conversation by shifting to an over-the-shoulder view towards the end of the scene.

Just when he thinks he knows what is going on, the tables turn on Steve again as the extreme close-up shot of the woman pushing a panic button pays off. Two heavily armored men burst through the door which triggers a physical reaction from Steve. As he is reeling backwards, the camera lingers for a fraction of a second before following his motion and zooming in on his shocked expression. Each precise camera movement contributes to showing the viewer how Steve Rogers is feeling in the moment. The viewer is drawn into the scene and Steve’s perspective through the use of medium and close-up shots that bounce between Steve and other elements in the scene.

A shot-by-shot explanation of this scene can be found in the graphic below:

The aftermath of a dog gone wild. She has no regrets.

30 second video of me and my cat watering the indoor plants. I used a few different shots, such as longshot, close-up, and extreme close up.

For my framing assignment, I video taped different shots of someone cooking in the kitchen. I got some up close shots of her hands as she chops vegetables and a high view of her stirring. I also go some landscape shots so you can see the environment of the whole kitchen. I did some medium close-up shots of her as she cooked. I also did some medium, waste up shots along with some long full body shots. As the video goes along of her cooking, it ends with a scene that almost looks like a crime. A crime of food. The husband comes into the shot as she’s not looking at sneaks a taste of her cooking. As he turns around he runs into her catching him. She’s staring right at him when he turns around. He’s been caught!