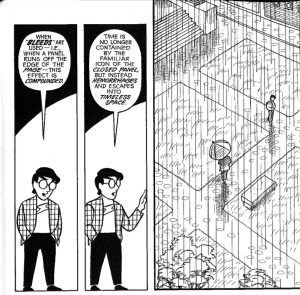 Thinking about this concept in terms of film, camera movement could be used to manipulate the passage of time. In the same way that the panel runs off the page, you could move the camera in a way that moves the subject(s) out of frame to suggest that some time has passed before the next shot happens. This effect could be used to transition to a shot at a different location, or even an identical shot at the same location. The shot could be held off the subjects (out a window, at the sky, at a different subject, etc.) or a fade-to-black effect could be added to lengthen the empty space as long as you might want.

Another technique that could be taken from this is to make the shot farther away. If the shot is wider, more objects and subjects can be inserted into the frame, making the viewer take more time to process what is happening and what is in the shot, which will make the shot seem to take longer. Conversely, you could have a shot be closer to the subject to focus on something important and get rid of unnecessary things that might distract the viewer. 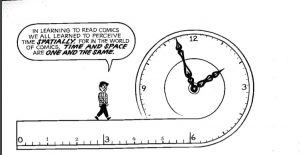 Time Frames by Scott McCloud discusses how time is perceived in comics and how this compares to other mediums. In comics, one panel can represent different lengths of time depending on the content. If a panel has no dialogue, it can be perceived that the panel represent one instantaneous moment in time. That same panel can represent a longer point in time with dialogue. In contrast to this, shots in cinema usually represent time moving forward (the speed at which time is moving can vary) but time is moving forward nonetheless.

It is interesting how in comics the reader has more control, and flexibility, over how they perceive time. They can see the past, present, and future of a sequence all at the same time. While watching a film, you are subject to perceiving the sequence the way that someone else intended it to be seen.

Complicated. But, with McCloud’s oodles of drawn examples, it was easy to visualize what it means to show motion in a two-dimensional medium.

[page 100 – “I guess.”] In showing the duration of time, McCloud’s visual description of comics is quite clear, like storyboard-ing for cinema. The size/width of the panels represent moment-to-moment, whether it’s several incidents happening at the same time or if a person is doing something that requires seconds to do. One comic panel show a moment in time, but with dialogue or captions, the moment is stretched. “The panel acts as a sort of general indicator that time or space is being divided,” McCloud says.

[page 103] “Bleeds” or when the drawing goes to the edge of the page (no border or panel), time is elevated.

In his example of extreme-close-up of the eye movement from left to right or the long shot used in the bleed panel of the rain, the comic framing, within panels, aids to the narrative in ways similar to cinema.

[page 110, 112-113 motion line] Comics, a static medium, uses techniques to show motion. In one panel, several figures can show the movement — each figure representing the continuous changes of the body — of a character running. Or simplified, a ‘swinging’ fist or a ‘falling’ piano, motion lines or zip ribbons are used. A blurred background of a camera shot shows movement, similarly to a streaked background in comics.

[page 115, polyptych] With the use of continuous backgrounds or polyptych, this technique too, creates time and space for which the character moves through. McCloud used an example of walking through a kitchen, while making a sandwich. Each panel shows different areas of the kitchen, with each panel showing continuous framing, which allows the reader to instantly know that he is indeed moving from one end of the kitchen to the other in space.