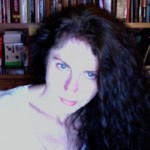 The author in her home office

An Associate Professor and Director of The Creative Media & Digital Culture Program at Washington State University Vancouver, I work in the area of electronic literature, emergent technology and cognition, and ephemera.

Though I began my academic career as a scholar of Homer’s Odyssey, I had long been fascinated with computers and what they could do for art and scholarship.  For my work with Homer in the early 1990s, for example, I used hypertext authoring software Storyspace, a beta CD version of Perseus, and a newly released word search system called Pandora to conduct textual studies of the Odyssey.  My love for graphic design had already introduced me to the glories of Mac Paint and Mac Draw, so I was using early Mac computers for experimenting with electronic publishing.  It stands to reason that I would create one of the first scholarly webpages in the Dallas area before the web was introduced (using ASCII art for the image of Penelope) and defend my dissertation in a virtual environment called a MOO.

My leap to digital media as a field of study generated from these activities and was encouraged when I was invited to Kate Hayles’ 2001 NEH Summer Institute called “Literature in Transition.” Out of that experience I was further motivated to study media art more deeply and, so, did a 2-year post-doc with Roy Ascott’s (then called) CAiiA-STAR (Center for Advanced Inquiry in Interactive Art/Science, Technology, and Art Research).

Since then I have produced numerous digital media works, including  “Fallow Field:  A Story in Two Parts” and “The Jungfrau Tapes:  A Conversation with Diana Slattery about The Glide Project,” both of which have appeared in the Iowa Review Web; When Ghosts Will Die (with Canadian multimedia artist Steve Gibson), a piece that experiments with motion tracking technology to produce networked multimedia narratives; and “The 24-Hrs. Micro-Elit Project,” a series of 24 stories delivered on Twitter over the course of one day. This most recent project, “Fort Vancouver Mobile,” constitutes a move into mobile storytelling and design.

I serve as Associate Editor of Leonardo Reviews and Vice President of the Electronic Literature Organization.  I also like to curate media arts shows, particularly those relating to electronic literature.

My first newspaper job involved writing and editing stories, taking photographs, printing pages, cutting galleys into strips, waxing the back of those pieces of paper and then finally placing them onto the proofs by hand. I thought that process was fascinating, yet I also was curious about other ways to possibly share information. In that respect, I couldn’t have chosen a career in the media during any better era.

Since the mid-1990s, I have been an early adopter and experimenter
with media forms, particularly digital content shared via the
Internet. I was part of the initial wave of journalists who started
trying to augment print stories with web elements. Those efforts
included start-to-finish production of first-generation slideshows,
podcasts and news videos. I incorporated other innovative web
techniques in the evolution of print news along the way, including
some of the first examples of hypertexting, interactive contests and
distinct web portals and hubs related to particular news issues. As an
extension of that enterprising work, my academic research today — as
an assistant professor of media communication at Washington State
University Vancouver — involves the geolocated distribution of
nonfiction stories via mobile devices, the most prominent example of which is the Fort Vancouver Mobile project.

Having completed degrees in History and English at Washington State University, I now endeavor to complete a third degree in Digital Technology and Culture. For this project, I serve as the Technology/Research Assistant, where I work closely with Dr. Grigar keeping the project organized, monitoring the budget, and helping to coordinate the various and sundry moving parts. Beyond the Fort Vancouver Mobile project, I also work as a substitute teacher in the Evergreen School District.

My interest in the power of the Internet to connect people began while living in the isolated hamlet of State College, PA, in the mid-nineties.  There I completed one of the first academic studies that looked at the content of e-mail messages. It seems silly now, but at the time people presumed we would talk like robots to each other. At Arizona State University, I continued to study the ways that people use the Internet, culminating with a dissertation that investigated the importance that people placed on their online relationships. In the past few years, this area has blossomed into the field of social media.

For the Fort Vancouver Mobile Project, I work on the digital marketing and social media management of the project. These duties include managing the Facebook page, Tweeting, and writing blog posts. Beyond consulting work in my areas of expertise (research methods, social media, relationships), I teach several classes in the Creative Media and Digital Program, including Social Media and Digital Diversity.