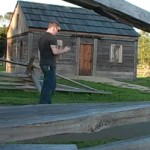 “Fort Vancouver Mobile, Phase 1” was funded by Clark County Commissioners 2010 Historical Promotions Grant and 2010 WSUV Mini-Grant.  Brett Oppegaard was PI for the former and we acted as co-PIs for the latter.  Here is a video produced by CMDC grad Aaron May that explains this phase of the project.

“Fort Vancouver Mobile, Phase 2” was first funded by Clark County Commissioners 2011 Historical Promotions Grant, for which Oppegaard acted as PI.  This funding allowed us to begin work on the schema for the project and early research into the history of the site. The 2011 NEH Start Up Grant that Oppegaard and I are heading up together allows us to produce the stories, create the content on the apps, conduct usability testing and beta-testing of the material.