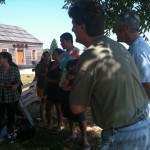 Let me tell you where I am so far with this project. . .

October 2011 Report
Brett and I have hired Kerri Lingo to help us with managing the paperwork for the NEH grant.  Kerri is about to graduate from the CMDC Program and has been acting as the Project Manager for the CMDC’s  Mobile Tech Research Initiative, meaning she comes to us with much experience about how to handle large projects and prepare apps for the app store.

The Project Managers’ Meeting hosted by the Office of Digital Humanities at theNational Endowment for the Humanities took place yesterday, and I had the chance to talk about the project in front of other NEH Start Up recipients, visitors to the meeting, and the press.  Here are the slides and the talking points from my presentation.

In preparation for that meeting I put together a project update that lays out much of the advancements we have made in regards to the project.  Some highlights, though, include:

I have been invited to give two talks in October about the project.  The first, entitled “Bringing the Art of Design to the National Park Service:  The Fort Vancouver Mobile Project,” will take place at West Virginia University on October 17, 2011.  My colleague, Sandy Baldwin, from the Electronic Literature Organization invited me to give this talk to students and faculty.

The second, “Connecting with the Past, Networked for the Future:  The Fort Vancouver Mobile Project and The Mobile Tech Research Initiative,” takes place at the University of Pittsburgh on October 19, 2011 and is part of the university’s DM@P (Digital Media at Pitt), scholarly and production based research initiative sponsored by the Office of the Provost and the School of Arts and Sciences.  My colleague Jamie Skye Bianco from the English Department at Pitt invited me to speak.

I should also mention that Brett Oppegaard and I will be talking about the project in our forthcoming article, “The Interrelationships of Digital Storytelling Mobile Media,” for Jason Farman’s book,  Mobile Media Narratives.

The entire CMDC faculty will be talking about the Fort Vancouver Mobile project in their forthcoming conference presentation, “Teaching App Design and Development,” at the 2011 International Digital Media & Arts Association Conference, taking place in Savannah, GA in October 2011.  We will also be using it as a model for design and development in the course we are all teaching (“App Design and Development”) at the upcoming Digital Humanities Summer Institute taking place at the University of Victoria, B.C. in June 2012.

July 2011 Report
Brett and I received notice on April 18 that we received the NEH Start Up Grant. Because the bulk of the work for Phase 1 (e.g. story production, coding, submission to Apple App Store, usability testing for the Android phone) had already been completed, we were ready to get started on Phase 2 as soon as beta-testing the iPhone version for Phase 1 was completed on June 8.

In the meantime, in my capacity as Director of The Creative Media & Digital Culture Program at WSUV, I organized four summer school courses in a cluster I affectionately refer to as “AppCamp” (but is officially called The Mobile Tech Research Initiative). AppCamp, which runs until July 28, 2011, focuses on mobile app design and development.  I am proud to say that Dick Hannah Dealerships, seeing the importance of providing this kind of education to the next generation of multimedia authors, funded AppCamp with $67K.  This support allowed me to give nine undergrads, one post-bac, and one post-doc free tuition for their study. As faculty teaching app and multimedia content design for smart phones and tablets as well as a student learning how to hand-code for iPhones, I have benefited greatly from AppCamp in that it has allowed me the opportunity to think deeply about best practices for app production as I work on my own project.

Here is the “Work Plan” Oppegaard and I developed and the progress we have made for each:

October 2011: Beta testing during Tales of the Engage special events at the site, including focus groups and surveys,with results compared to findings in Phase One.

December 2011: Prototype launch at Christmas at the Fort special event, dissemination of all information learnedfrom Phase Two, including how that will inform and shape Phase Three, plus a thorough postmortem that directs thequestions to be asked and tested in Phase Three. White paper produced about the project, describing in detail theprocess, results and implications for future research (Grigar, Oppegaard, Shine, Cromwell, Wilson, Langford; plusreview and feedback from the advisory board).