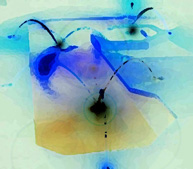 The Fountain of the Avatars, in Nouspace, circa 2000

Nouspace Gallery & Media Lounge began in 1997 as Nouspace, a virtual environment aimed at experimenting with online, participatory communities. At the time browsers were still relatively new, and sound, images, and video, difficult to share over the net.  Hard as it is to imagine, Facebook and Twitter did not yet exist (Mark Zuckerberg was 13 in 1997).  So many early virtual communities took the form of MUDs and MOOs (or “Multi-User Domain Object-Oriented”). Nouspace itself was a MOO that brought people together from across the world in one space for poetry readings, lectures, meetings, and social gatherings.  Grigar had joined LinguaMOO in 1994 and defended her dissertation in it in 1995 (See Grigar and Barber’s article, “Defending Your Life in Cyberspace,” High Wired, Ed. Haynes & Holmevik, 1998). The development of her own virtual environment, Nouspace, while she taught at Texas Woman’s University, offered a place to continue thinking about what it means to live and work online and how one best interacts with and presents multimedia on the web.  Some of the highlights of Nouspace during this period included hosting 750 scholars to an online version of the 1999 Feminisms and Rhetoric Conference (hosted by the U of Minnesota) and teaching numerous university courses, like “Feminist Cyberculture,” “American Women and Literature” and “World Literature” synchronously online at the site. 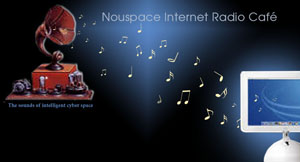 A graphic from Nouspace Radio Café, circa 2002

In 2002 the ability to broadcast sound across the net improved due to the introduction of broadband technology. This development compelled Barber to add internet radio to Nouspace. “Nouspace Radio Café (with a tagline of “the sounds of intelligent cyberspace”) was used for experimenting with online streaming, work that eventually led to using the station for online teaching and learning (See Grigar and Barber’s article, “Winged Words,” Going Wireless, Ed. Hae, 2009).  The station’s “Wednesday Café” became popular for its broadcasting of local poetry readings over the net to an international audience. 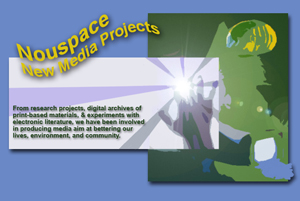 The front page from Nouspace New Media Projects, circa 2006

When Grigar and Barber moved to Vancouver, WA in 2006 and took faculty positions with the Digital Technology & Culture program (now “Creative Media & Digital Culture program) at WSUV, Nouspace was set aside so that they could concentrate on building the program.  What remained of it was a website called Nouspace New Media Projects.  The growth of social media and the development of mobile media from 2006-12 meant that when Grigar and Barber did relaunch Nouspace, they would need to take it in a totally different direction––one that would make sense for the technologies at hand, the zeitgeist of the period, refinement of their own interests (Re: Grigar’s work with curating digital media, Barber’s focus on sound production), and, as importantly, the needs of the local community in which they teach and where they live.

Nouspace’s re-emergence in 2012 (15 years after its original founding), along with its transformation as a physical site in downtown Vancouver that takes the form of an interactive, multimedia gallery and internet radio station, mark major milestones in its history.

If you are wondering where the name, Nouspace, comes from,  “Nous” (or “noos”) is the ancient Greek word for mind. It implies perception, sense and purpose. It represents one’s heart, the essense of oneself. Inherent in the word is the notion of humanness. “Nous” is the French word for we, us, to us, and each other. Pronounced “nou,” nous rhymes with the English “new.” So, Nouspace is a space for those who like new ideas, who want to experience new ways of expressing and enjoying art, who want to learn about interactive and computer-based media.