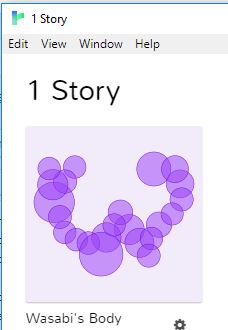 For my final project, I created a non-fiction hypertext story modeled largely after Shelley Jackson’s hypertext semi-fiction work “My Body.” My work is called “Wasabi’s Body” and tells the story about how my family ended up with a cat instead of a Christmas tree one year, and just how awesome a decision that was. Unfortunately, I’m not able to host my work and keep the media that I’d incorporated, so I’ve emailed it instead.

I had a lot of fun working on this story, and incorporating various images of my cat. He really is pretty cool. I was inspired to make my own hypertext version of “My Body” after reading Jackson’s work because it was so interesting. I’d never made a hypertext story before and it was challenging but enjoyable. Learning how to incorporate media took some trial and error, but I’ve found I learn pretty well that way (despite the extra time it takes).

My project is definitely entry-level because I didn’t use any advanced “if/then” type programming, but I wanted to keep it somewhat true to Jackson’s recipe with multiple links on one page linking back and forth to different body parts and sections of the same story. My work isn’t metafictional, like Scott Rettberg describes Jackson’s works, but it is reflexive in the ways that the images and gifs used play with the text and play off of the text. I also explored branching stories (van and cat person) that are tenuously related to the main story of how we came to adopt our cat. This felt very postmodern in its fragmentation, while still maintaining an overall theme.

The Twine platform is a new twist on a genre that’s been around a while. It embodies the E-Lit definition of “born digital” as Rettberg describes hypertext fiction: “fundamentally a text technology” (62). It also allows authors new to the genre, like myself, to explore hypertext literature in a non-threatening way that inspires creativity, and I’m glad I had a chance to try my hand at a genre that’s helped to shape such an interesting field.