Posted on January 15, 2013 by | Comments Off on New Media Objects: Interactive Installations by Robison, Charity 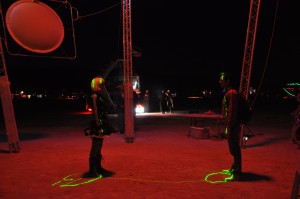 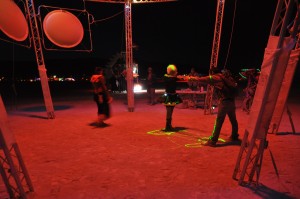 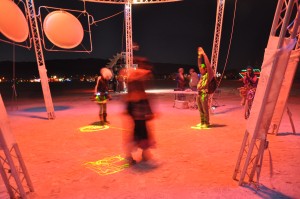 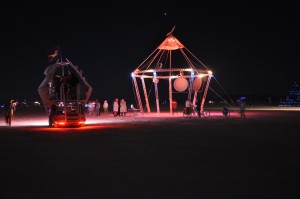 Hello, my name is Charity and I am a post-bach student in the DTC program.  I come from a fine arts background so my challenge is to transfer what I can of my studio skills and knowledge into a digital format that I can use to further my language of expression.

Math offends me and the digital realm is challenging with its limited tactile process and lack of physical or organic matter to touch, feel, and manipulate with my hands.  It also looks a lot like math..

There are a great many new media objects to chose from so I decided to simply look over the slides and see what came to mind.  This random exploration worked out well and resulted in some unexpected recollections.  When I looked  over interactive installations, I was immediately taken to an experience I had at Burning Man in 2009 with an installation titled Steve the Robot H.E.Ai.D.

It is described as “a Human Energized Artificial Intelligence Device that encouraged collaborative sound and music making inside a giant 35 foot structure made to resemble a giant robot head. Motion is detected using a camera mounted at the peak of the structure, which is then used to generate sound and project the laser image.”

I had come to it out on the playa late one night and found myself completely fascinated by the physical and visible connection I had with the piece.  I danced with someone and watched it trace my every move along with theirs via laser lights onto the playa dust beneath me.  I was actually watching the electricity and energy between myself and another.

In relation to the characteristics of new media by Lev Manovich, I believe this met all five.  By creating an interactive connection between a computer and the human body, numerical representation (p.27) was made via intelligence that communicated between various systems to create the whole. There is an algorithm recording and transcribing human movement into a digital format.

The numeral representation here incorporated modularity (p.30) by combining several methods of data gathering to create the cohesive result of man and machine.  This is also, in part, an automative (p.32) process.  Computers have been explicitly designed and programed to record the human or analog movement and transcribe them into a digital format that can then be further translated into a visual shape and form.  Variability (p.36)  is then nearly infinite as it is defined by each individual that interacts with it, recording not only their physical stature and form, but also their movement.  Transcoding (p.45) follows with the materialization of this digital interpretation of an analog subject.  The human body and its movements are displayed in a digital format via laser lights.

Here is a short video clip of the installation:

My name is Samai Mendoza I am a freshmen at WSUV. I’m undecided on my major but I’m thinking to major on public affairs. I’m taking this class to satisfy my ucore and it looks fun.

Internet/websites it’s a new media.  There are a lot of things we can find on the internet today from games to social networks to all kinds of information. We can play online games like angry birds and Pac man.  We can also find social networks like Facebook and twitter. Internet is a digital media object because according to the lecture slides the definition of digital is “objects produced with the help of computers” and internet and everything that it holds is obviously produced with the help of computers. Facebook and twitter are “media [that] becomes programmable” (p.27) as Manovich states as a typical new media. Pictures and videos can be shared in Facebook and basically controlled by the person who adds them as the in the numerical representation characteristic explains. You even have to crop the picture when you want to make it your profile picture on Facebook. Facebook is also a new media object according to Manovich in the Variability characteristics because most of the time Facebook upgrades and automatically updates. According to Manovich a new media “web sites are also periodically updated either manually or automatically.” (p.38). Facebook is also an example of modularity because of the use of text characters. Manovich says that new media “consists” of text characters. (p.31) in conclusion” new media is created on computers” (p.46) which is transcoding and Facebook is an example of it. As years go by there would be new media and there will be new expectations to be considered new media and the new media that is today will be old media in a few years.

Comments Off on blog 1-new media

The first iPad came to the world on April 2010 and it is obvious example for digital object. It was only about two years since the first iPad released but it shifted the technological human demands to higher levels as a new media. More than that, people are getting close to technological world because of the digital device’s features as iPad and it brings people closer to others by communication developments. Apple Incorporation created iPad and it is small mobile computer with touching operations. It has Numerical Representation as it converts continuous data into numerical representation (Manovich 28); for example, you can view your images on iPhoto that is one of the greatest applications on iPad. There are a lot of features on the iPhoto that you can adjust the image’s color, shadow, angles and you can flat or crop the photo. It also satisfies Modularity; Manovich states “These elements are assembled into large-scale objects but continue to maintain their separate identities” (Manovich 30). We can watch movie on Ipad and movie is the combination between sounds and images. They always have different identities but they all run at the same time. Plus, the World Wide Web is also modular (Manovich 31); the iPad was invented with built-in Wi-Fi and cellular connectivity. That way, you can search any websites on Ipad by Safari. Besides, iPad goes along with Variability as it maintains itself and generates new supporting programs by period updates (Manovich 38).  IPad’s update requirements are established in the App Store and it will alert you when the new updates release. This new media is an amazingly great device that has multiple benefits with reasonable prices.

Hi, my name is Vitaliy. I graduated from Clark College with an Associate in Arts Degree. This is my first semester as a freshman at WSU Vancouver. The plan is to major in Computer Science.

iBooks Author is an application created by Apple to create gorgeous, multi-touch textbooks for the iPad. According to Manovich, there are five characteristics that identify a new media object. The characteristic of numerical representation applies to iBooks Author because it is an application that stores information electronically using a binary code (Manovich 25). The characteristic of modularity is also satisfied by iBooks Author. Manovich states that elements are combined together, yet still continue to remain separate (Manovich 30). In iBooks Author, the author has the option to make his/her textbook interactive by adding widgets such as galleries, videos, diagrams, 3D objects, and much more various items. These elements are all combined in a digital textbook, yet still remain separate from one another. Automation is the third characteristic that defines a new media object. Automation assists the individual through “agents” such as templates so that “human intentionality can be removed from the creative process” (Manovich 32). iBooks Author has many templates designed by Apple to assist the individual and make the textbook look stunning instantly. The fourth characteristic of variability is also achieved by iBooks Author. A new media object must be able to arise in many different versions in order to have variability (Manovich 36). With iBooks Author, the individual can create textbooks for a variety of subjects, as well as create more volumes for the same subject. The fifth and final characteristic, transcoding, has not been left out by iBooks Author. The media that is generated must be readable by the human, as well as the computer (Manovich 45). There is no doubt that that the textbooks can be read by applications such as iBooks or iTunes U, and these applications can decide if the textbook is the correct file format, file type, or size. iBooks author is a powerful, yet amazing tool for creating digitally-interactive textbooks, and fulfills the characteristics of a new media object.

Comments Off on iBooks Author

Hulu is an online website that allows anyone and everyone to access the latest in television entertainment. There are highlights of weekly episodes, lists of popular shows and even clips of various programs under the “best of” category. Hulu is a new media object as defined by Manovich as it fits all five characteristics he explains in his book, “The Language of New Media”. The first descriptor he uses is the visual aspect of such an object–numerical representation. This is a website; it is digital and plays digital videos. Secondly, there must be modularity; links to other websites that draw from the host site. Hulu has ads and even commercials interspersed within the programs it shows. Although many find this to be obnoxious, the ads serve their purpose. Automation or the process of working without any human interaction is easily identified with weekly updates and the upload of episodes at a specified time each day. Humans need not worry about pressing the “upload” button at just the right time in each timezone if we can simply program a computer to do it for us. Variability is another part of Manovich’s definition of a new media object. Hulu displays, based on shows viewed previously by the user, shows and clips that are related to the intended audience. For instance, if someone were to watch an episode of the Colbert Report, Hulu will suggest other episodes and perhaps even shows that are often coupled with Colbert like the Daily Show. Lastly, there must be technological influence in the form of transcoding. Transcoding is all about the way in which new media is associated with certain stereotypes in culture. Hulu for instance brings in audience members from all facets of life: people living without television who depend on online streaming, people with busy lives who miss certain shows and wish to view it online rather than waiting for it to rerun, et cetera. Hulu encapsulates the five core concepts of a new media object and will continue to set the trend for the digital age as more and more people choose to eliminate their cable or satellite contracts and switch to online streaming.

Comments Off on Hulu